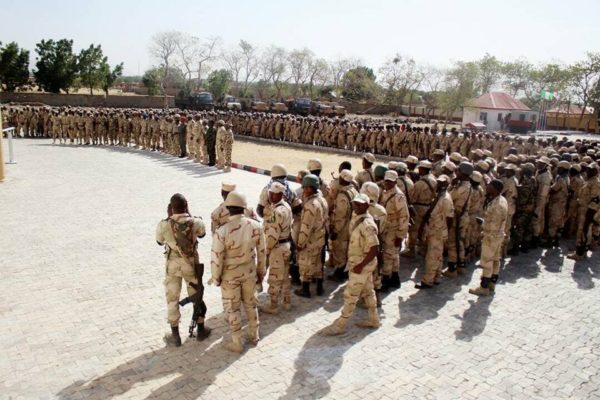 Rabiu Sani : The Nigerian Army on Monday said it had inducted a unit of Cameroon Defence Forces into Operation Lafiya Dole to fast-track campaign against Boko Haram insurgents.

Nwachukwu said that the Cameroonian forces were inducted on Sunday at Gwoza, by Maj.-Gen. Rogers Nicholas, the Theatre Commander of Operation Lafiya Dole.

He explained that the Cameroonian troops would join the ongoing counter-insurgency operations in the northeast and the borders between Nigeria and Cameroon.

“The Cameroonian troops and their equipment were subsequently handed over to the General Officer Commanding (GOC), 7 Division, who is also the Commander, Sector 1, of Operation LAFIYA DOLE”.

Nicholas was quoted as calling on the troops to be disciplined and demonstrate high sense of professionalism in the discharge of their duties.

He also tasked the troops to comply with instructions by their commanding officers, noting that such attitude would hasten the defeat of the insurgents.

The Nigerian military authorities on Saturday declared victory over the Boko Haram terrorists after its troops overran the insurgents’ tactical ground deep in Sambisa Forest.

The troops destroyed several insurgents’ hideouts, equipment, and ammunition and rescued hundreds of civilians while hundreds of the insurgents surrendered.

He charged the soldiers to be alert and vigilant in order to avoid surprise attack and stressed the need for effective surveillance against the Boko Haram insurgents.

Irabor said that the visit would avail him the opportunity to assess operational readiness of the troops.

He commended officers and men of the command over their contributions in the ongoing counter-insurgency campaign in the Lake Chad region.

The commander gave an assurance about the command’s continued support and assistance to the troops.

The Sector Commander, Col. Noma Dari, briefed the visiting team on the achievements and challenges facing the formation in the ongoing campaign against terrorism.