The National Economic Council Committee on Farmers and Herdsmen clashes on Saturday visited Zamfara on a fact-finding mission over security challenges in the state. 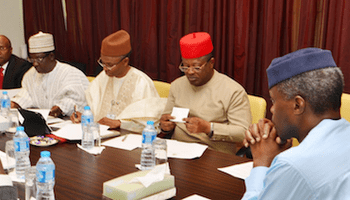 The committee was led by its Chairman, Gov. Dave Umahi of Ebonyi.

Speaking during the courtesy visit at government house Gusau, the Umahi said “we are in Zamfara today for fact finding over the recent security challenges faced by the state”.

He said Vice President Yemi Osinbajo, constituted the committee on behalf of the Federal Government.

Umahi said the committee is expected to interact with the government and major stakeholders in the state.

According to him, the aim is to find solutions to the security problems in the state and country at large.

“The committee since inception have been working hand in hand with the governor’s forum to address security challenges in the country.

“We have earlier visited Benue, Nasarawa,Taraba and Adamawa and we have recorded great successes during the visits.

“We are in Zamfara today and from what we have seen we are expecting good outcome from the people of the state.

“I am using this opportunity to call on Nigerians irrespective of our differences to continue to cooperate with the Federal Government under the leadership of President Muhammad Buhari to improve security of the country,” he said.

Responding, Gov. Abdul’aziz Yari who described the visit as timely, commended the Federal Government for establishing the committee.

Yari said the state government would support and cooperate with the committee to end security challenges in the state and country at large.

The committee also met with the major security stakehokders in the state. (NAN)