We are winning war against oil theft in Bayelsa – NSCDC

The Nigeria Security and Civil Defence Corps (NSCDC), Bayelsa Command, says it is winning the war against oil theft.

The NSCDC Commandant in the state, Mr Godwin Nwachukwu, gave the assurance in an interview with the News Agency of Nigeria (NAN) on Saturday in Yenagoa. 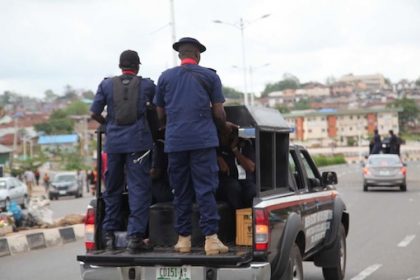 He described as false, an allegation that personnel of the state command shot a vigilance team member.

He said that oil thieves were behind the allegation in an effort to divert attention.

Nwachukwu pledged that the command would not relent in checking oil theft and pipeline vandalism in spite of such blackmail.

He said that personnel of the command were well trained in handling arms and would not use firearms indiscriminately.

“All the allegations are to distract attention from the fight against oil theft and vandalism of oil infrastructure.

“The syndicate has always adopted devilish strategies to frustrate the efforts of the NSCDC.

“In spite of the antics of these evil merchants, we remain resolute to end this economic crime.

“In the early hours of Monday, our anti-vandal team based in Ikarama Community responded to a case of sabotage on oil pipeline in the area,’’ he told NAN.

The commandant said that the team did not release gunshots in spite of provocations.

“Though the prime suspect escaped, we were able to arrest a woman who works with him and knew his whereabouts; she was interrogated and later released,” he said.

Nwachukwu also reacted to an allegation that NSCDC men shot an indigene of Ikarama Community.

According to him, an NSCDC team deployed to protect oil facilities at Ikarama community shot in self-defence when attacked by youths in the community.

“In the face of the threat, my men acted in self-defence and fired two warning shots into the air to scare away the hostile crowd armed with dangerous weapons.

“No one was shot at and no one was injured,” he told NAN.

Seiba said that the alleged victim was receiving medical attention.

“They shot the boy twice in the arm and leg. I have just visited him, and he is in pains,” the royal father said. (NAN)