First Bank Holdings has expressed its readiness to collaborate with the government in providing security in Offa Local Government Area of Kwara to curb incessant armed robbery. 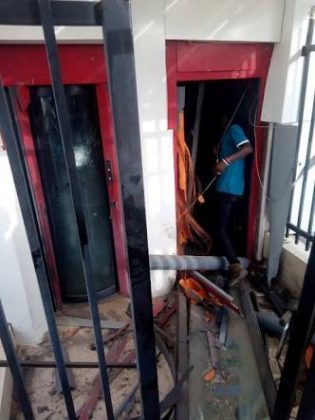 The Managing Director of the holdings, Dr. Adesola Kazeem said this in an interview with the News Agency of Nigeria (NAN), at the Ilorin International Airport on Monday.

The MD said, “We are very sad at the development but thankful to God that none of our staff or customers lost their lives to the armed robbery attack.

“We are planning to partner the various tiers of government to ensure that sophisticated security outfit is provided within our branches in Offa,” the MD said.

According to him, First Bank will support the police in ensuring that sound security apparatus is installed within the premises of the bank.

Kazeem also assured the bank’s customers that it would resume operations as quickly as possible in the community to ease their transactions.

He also called on the public to always report any suspicious person to the security agencies for necessary action.

Kazeem appealed to both the Federal and the various state governments to assist banks curb attacks on banks in the country by putting in place adequate security measures.

NAN reports that the robbers killed 24 people, including policemen and residents when they attacked branches of the Union Bank, ECOBANK, Guarantee Trust Bank, First Bank, Zenith Bank and Ibolo Micro Finance Bank in Offa on April 5.

Also, some of those who sustained various injuries from the attacks were taken to different hospitals for treatment. (NAN)