Requiem masses were held in all parishes of the Catholic Diocese of Makurdi on Monday for the murdered priests and parishioners of Saint Ignatius Quasi Parish, Mbalom in Gwer Local Government Council of the state.

The Catholic Bishop of Makurdi Diocese, Most Rev. Wilfred Anagbe, directed that masses be held throughout the diocese for the priests and the parishioners killed by gunmen during morning mass on April 24. 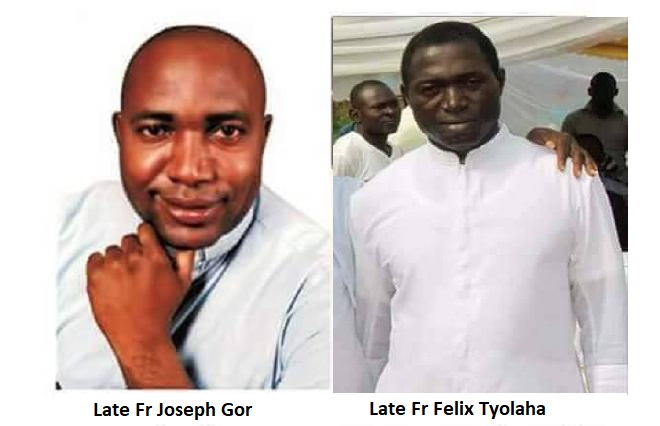 Anagbe described the deaths as “sacrilegious” and called on Christians, particularly, Catholics to hold to their faith despite such brazen acts of barbarism against their fellow members.

The attacks had been condemned by all Nigerians, including non Christians.

The masses, which commenced between 6pm and 7 pm, were celebrated by parish priests at their respective parishes.

In his homily during the requiem mass on Monday, the Parish priest in charge of Saint Theresa’s parish, Makurdi, Rev Fr. Amos Mbachie, said the priests died for peace to reign in the state.

He was hopeful that their deaths, together with the 17 others, would end the spate of killings across the state.

He also offered prayers for the parishioners, who were killed during the attacks, and asked for the forgiveness of their sins.

At the Catholic Youth Centre Parish, Fr. Celestine Tyowua, offered prayers for peace in Benue and described the two priests as martyrs, saying that the church would soon commence the process of canonizing them as saints.

He charged parishioners to use their ballot power wisely in 2019 to prevent unnecessary blood shed in the country.

Tyowua advised them to be bold and courageous in speaking against injustice and wickedness in the society.

Tyolaha had a Masters Degree in Biology and worked before joining the priesthood while Gor had tremendous interests in farming and was trained in rearing snails and specialised in maize cultivation.

The Director of Communications of the Diocese, Rev Fr Moses Iorspuu, said Pope Francis had despatched a delegation of 50 bishops for the burial, which is expected to hold at the Ave Maria Prayer Pilgrimage Ground, on the Ayati hilltop in Gwer local government council.(NAN)