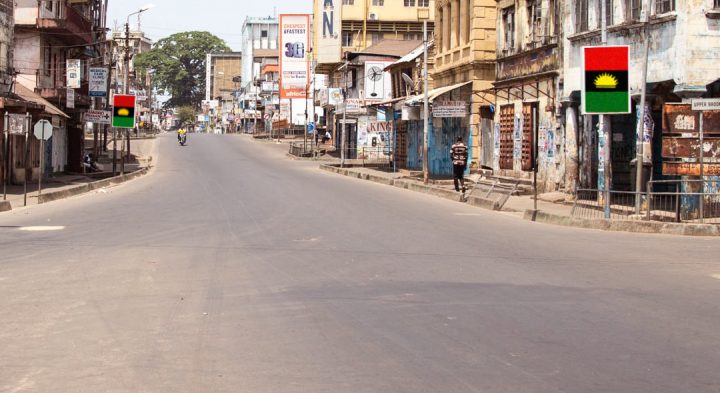 A South-Easthern City on a typical Sit-At-Home day

The Police Command in Abia on Monday led detachments of the Nigerian Army and Nigerian Security and Civil Defence Corps (NSCDC) in a show of strength in Umuahia, ahead of the POB sit-at-home order for Wednesday, May 30.

News Agency of Nigeria (NAN) reports that the exercise took off from the Central Police Station (CPS), Umuahia, at about 9 a.m. and moved round the major streets up to Ubakala and Olokoro in Umuahia South Local Government Area back to CPS, via Bende Road.

The convoy included one Armoured Personnel Carrier and about 15 patrol vans, loaded with heavily armed men.

Speaking with newsmen at the end of the show, the Commissioner of Police, Mr Anthony Ogbizi, said the joint exercise was designed to reassure residents of the readiness of the security agencies to continue to protect their lives and property.

“The show of strength included men of the Police Command, the army and Civil Defence and the essence is to demonstrate our resolve to ensure that Abia residents continue to enjoy uninterrupted peace.

“We are poised to continue to sustain the prevailing peace and wish to send a signal to trouble makers, especially members of the Indigenous People of Biafra (IPOB), which has been proscribed as a terrorist group.

“We want them to know that the law will not spare them should they go ahead to disrupt the prevailing peace, which residents of the state are presently enjoying.

“So we used this opportunity to instil confidence in the people that security agencies are alive to their primary duties of protecting their lives and property.”

The Police boss therefore urged the people to ignore the sit-at-home order and go about their lawful businesses without any fear of molestation.

“Sitting at home for fear of any possible attack by IPOB members will give them a sense of victory.”

Ogbizi further charged security operatives “to be alert and vigilant” to be able to checkmate the activities of IPOB.

He alleged that the group now indulged in producing Improvised Explosive Devices (IED).

“If we do not respond now to nip the activities of the group in the bud, especially in producing IED, then we may be heading for doom.

He said that some policemen were recently attacked in Aba with IED, allegedly made by IPOB, adding that the incident was currently being investigated.

“Let us have it at the back of our minds that IPOB is a violent group. We should not treat them with kid gloves.

“We should work to protect ourselves. Your lives are as important as those that you protect.”

The police commissioner underscored the need for security agencies to sustain the existing synergy for mutual benefits. (NAN)