The Joint Military Force deployed to protect oil installations in the Niger Delta on Saturday in Port Harcourt concluded arms handling training designed to enhance the precision of troops.

The News Agency of Nigeria (NAN) reports that the one-month shooting and marksmanship exercise came to a climax with an inter-sector arms competition amongst the four sectors of the force based in the region. 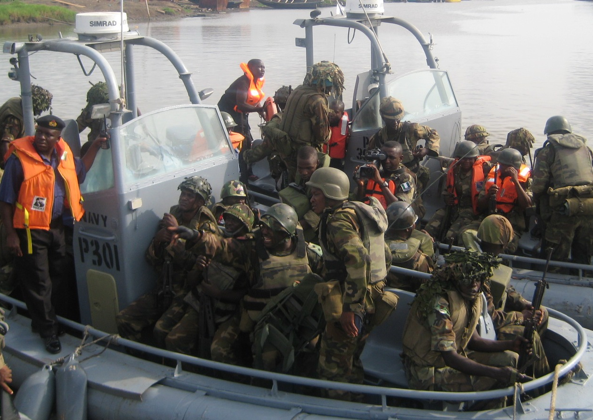 Speaking at the event, Gov. Seriake Dickson of Bayelsa who was the Special guest, reiterated that the performance of the military depends largely on their skills, which should be enhanced through training.

Dickson who spoke through his deputy, retired Rear Admiral John Jonah, advocated for the sustenance of the culture of periodic training of members of the armed forces in order to help them overcome the security challenges facing the country.

He noted that the Niger Delta environment, which consists of creeks, swamps, rivers with settlements along the Atlantic coastline was a very difficult terrain for military operations.

He, however, noted that the challenging terrain was a blessing in disguise as it provides a suitable environment for military training.

Commander of the Joint Force, Rear Admiral Suleiman Apochi, in his opening remarks, noted that the training was designed to enhance the combat readiness of the troops in view of the enormous risks they face.

“The need for training cannot be overemphasised, more so due to the composition of the force with personnel across the services of the military.

“It is also to make the personnel from different services work as a team.

“The training is to make the personnel more proficient and increase their precision to defend themselves when under attack and to defend the citizens and oil infrastructure,” Apochi stated.