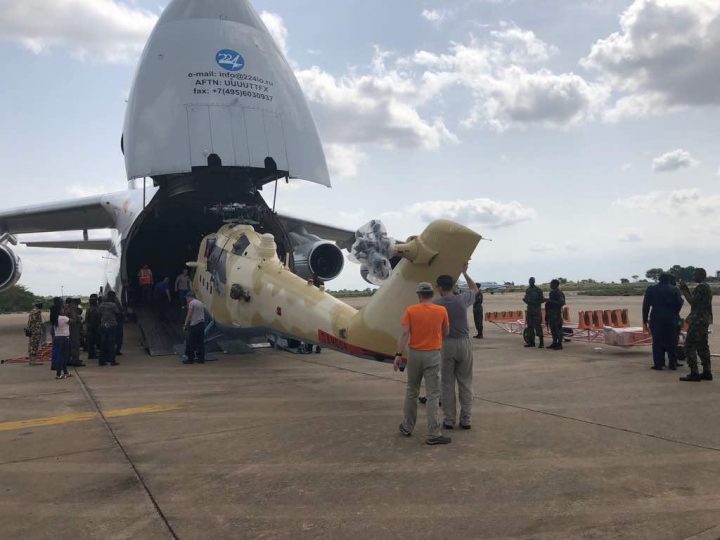 The News Agency of Nigeria reports that the helicopter gunships were delivered to Nigeria by Russaia in April.
NAN also reports that the President was represented by the Minister of Defence, Brig-Gen Muhammad Dan-Ali (Rtd) at the NAF base in Kaduna during celebrations to mark the 54th Anniversary of the Air Force.
The  theme of the year 54 event was, “Enhancing Nigerian Air Force Operational Capacity for Timely Employment of Air Power in Response to Contemporary Security Challenges. “
Buhari said the  NAF was established in April 1964 to achieve full complement of the country’s military defence system.
“As a young Army officer, i took part from the beginning to the end in our tragic civil war and I know the role the young NAF played in the prosecution of the civil war.
“NAF has undergone several developmental stages and the government over the years acquired various weopons system to enable the NAF to effectively perfom it’s roles.”
He said the most recent platforms added to NAF inventory by the current administration include, “Super Mushsak, the recently delivered Mi 35 Helicopters, the Daimond and various helicopters .
“We have also approved the purchase of Super Tucano aircraft.”
He added: “With the acquisition of these new weopons platforms, there arose the need to train personnel to man and maintain the new aircraft types.”
The President also disclosed that within the last two years NAF enlisted and recruited over 5,000 personnel to adequately boost its human capacity, which was in line with his administration efforts of creating jobs for unemployed youths.
Buhari said role of military as an enabler of national development cannot be overemphasized as the efforts would be futile if national security is not first guaranteed.
“Let me once  more commend the gallant men and women of the Nigerian  armed forces and other security agencies for their tireless efforts in defeating Boko Haram and other threats to our nation.”
The President saluted the efforts of the current leadership of NAF for performing its assignments wonderfully well.
Earlier the the Chief of Air Staff, Air Marshal Sadiq Abubakar said the growth of the NAF since the inception of the current administration has been particularly outstanding.
Abubakar said 12 grounded aircraft have been reactivated and personnel strength increased by 7,500 men and 400 officers.
“Two Commands and two new Branches have been established and new platforms acquired and inducted into service to meet the evolving security challenges we are faced with.”
The air chief said the gap between force projection and fence protection has been substantially bridged with 79 training of about 1000 Special Forces.
He said the special forces have been deployed as part of the intervention force to deal with the lntemal Security challenges of the North Central geopolitical zone.
“Some of the forces are deployed in Zurmi Local Government Area of Zamfara, working with other security agencies to deal with Internal Security challenges. By next week, another batch of the special forces will be deployed to the newly established Quick response wing at Nguroje in Taraba State.
“In addition, we are putting finishing touches to infrastructure in Keran Plateau State, lpetu ljesha in Osun state, Doma in Nasarawa and Agatu in Benue State to deploy elements of these forces.”he said.
Abubakar said NAF remain committed to supporting the vision of the government of ensuring a secured and prosperous Nigeria.(NAN)