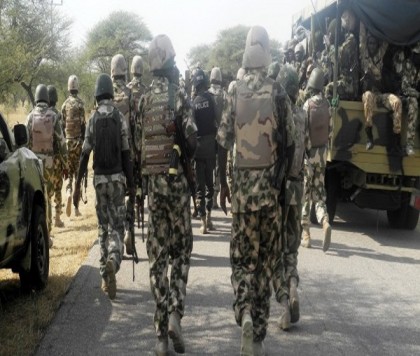 Dole said the troops of the Division, under Operation WHIRL PUNCH, responded to a distress call about an armed robbery along Birnin Gwari–Funtua road.

“While on pursuit of the armed robbers, they were ambushed by suspected bandits. However, they fought their way and overpowered the bandits, who hastily withdrew into Kwuyambana forest in Zamfara State.

He said during the pursuit of the bandits in the forest, the bodies of five bandits were found.

”Among the eliminated bandits was a notorious bandit from Zamfara identified as Sani Danbuzuwa.

“Regrettably, we lost one soldier and two were injured. The wounded soldiers were evacuated and they are responding to treatment at the military hospital in Kaduna.

He also disclosed that a wanted kidnapper and expert in negotiations for ransom, called Yinusa Suleiman, from Sambuwa village was apprehended by troops on Aug. 14.

“He is currently assisting the security operatives in further investigations,” he said.

Dole restated the troops’ commitment to ensuring security and safe passage to all commuters along highways of Kaduna–Abuja and Kaduna–Birnin Gwari roads as well as the adjoining towns and villages. (NAN)