adminNovember 8, 2018 11:48 am 0
A dismissed banker has been apprehended by the operatives of the Nigerian Police Force, for raiding his former bank’s ATM and stole N14million. 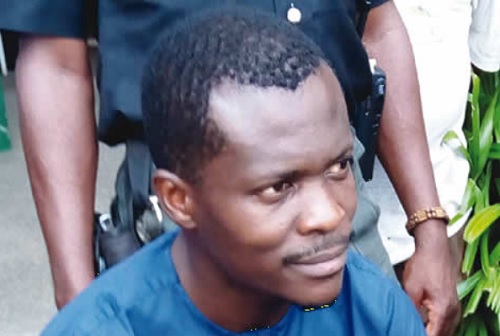 Emmanuel Onuma
Police officials have arrested a young man identified as Emmanuel Onuma, who is a dismissed banker, for breaking into the Automated Teller Machine (ATM) gallery of his erstwhile employer and stealing N14m.
According to PUNCH Metro, the 34-year-old suspect was said to have carried out the heist at the Garki, Abuja branch of the new generation bank on October 19, 2018.
Speaking while parading Onuma alongside other suspects in Abuja on Wednesday, the Assistant Commissioner of Police, Operations, Federal Capital Territory Police Command, Valentine Olumese, said the ex-banker was dismissed in August for fraudulent activities.
“On November 1, in furtherance of an ongoing investigation, police operatives attached to the Garki Division arrested one Emmanuel Onuma, who broke into the ATM lobby of a bank located in Garki on October 19 at about midnight and stole the sum of N14m,” Olumese stated.
Valentine explained that the suspect confessed that he converted the money to $33,000 in Abuja and Kaduna for ease of movement.
“Upon his arrest, the following amounts of money were recovered from him as exhibits: cash sum of $28,000; N1,650,120 and nine pieces of Ghana cedis. Other exhibits recovered from him include one new SIM card and flight tickets,” the commissioner added.
While speaking in an interview with journalists, Onuma, admitted to the crime, stating that he carried out the act because the bank failed to pay his benefits after sacking him.
“I worked with the bank for 11 years and I was not settled; no benefits, no settlement; but there is no justification for doing something wrong,” he stated and declined making further statements.