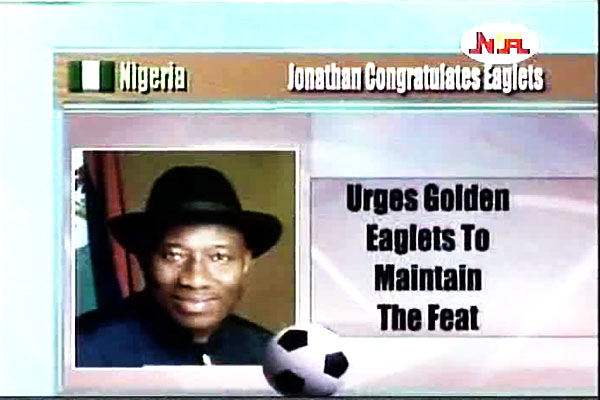 President Goodluck Jonathan congratulates the Golden Eaglets of Nigera on their 5-0 crushing defeat of the Iraqis today in the on-going FIFA Under-17, World Soccer Championship in the United Arab Emirates. As the Eaglets
progress the knock-out stages of the Championship as winners of their group, President Jonathan urges them to maintain the exemplary dedication, commitment and resilience they have exhibited thus far in the
competition until ultimate victory is achieved. The President urges the Eaglets and their handlers to prepare very well and how their acknowledged
skills on soccer artistry even further to overcome all their remaining opponents in the competition and bring the Under- 17 World Cup back home to Nigeria once again. He assures them of the fullest support of the
Federal Government and all Nigerians as they continue in the competition and trust that they keep giving Nigerians great joy and pride with victorious
performances in coming matches.