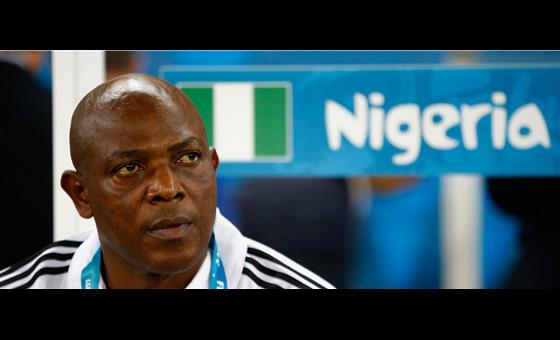 Nigeria trainer, Stephen Keshi has admitted that his new-look team  is a work in progress after  the Super Eagles claimed  a  2-0 win over neighbouring  Chad in their opening Group G 2017 African Cup of Nations(AFCON)  qualifier.

The Super Eagles who were 2013 AFCON winners, failed to defend their title at the last edition earlier this year, after suffering a 3-2 home loss to Congo in an opening qualifier, never recovered in time to join the party in Equatorial Guinea.

“In the first half, my boys were too cautious because being new players most of them didn’t want to make mistakes,” Keshi told Cafonline.com.

“The changes we made in the second half opened the game up and we were able to get our goals.

“I was impressed with Ekong, I know he’s a decent defender having watched him a few times and I am happy with the team generally.”

Keshi said there were a lot of positives from the game, adding that he would continue to thinker with the team in his resolve to build a championship winning team.

In his heyday, Keshi belonged to what was regarded as the ‘golden generation’ of Nigerian football when the Super Eagles conquered the continent with aplomb at the 1994 AFCON in Tunisia on their way to a maiden appearance at the USA’94 FIFA World Cup finals.

“I don’t want you to compare players so as to avoid unnecessary pressure,” noted Keshi before singling for special praise, former junior international Rabiu Ibrahim who has been compared with legendary Austin ‘Jay Jay’ Okocha.

“I recalled Rabiu Ibrahim into the team because I discovered that he’s back playing regular football with his club (FK AS Trenčín of Slovakia) and I am happy he justified my confidence in him with his performance.”

Speaking further, the 2013 CAF Coach of the Year revealed that he would be adopting a routine policy of ‘elimination by substitution ‘in fashioning out a solid new-look Super Eagles.

He explained: “even when you have a team for five years you still need to be substituting   the players until you have a balanced team. We must continue to make substitution.

“They played to instruction (against Chad); they were disciplined in their marking, the new players did well and they are good addition to what we have.

“I have been watching some of the new boys over the years and that was why they got the call up for this match. No matter how long you have in building a team, you will still continue to give some other players a chance. we will continue to do that until we have a solid team, ” he stated.

Nigeria will next travel to Dar es Salaam to face to the Taifa Stars of Tanzania next September.