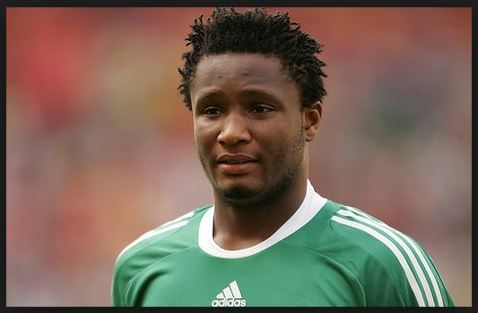 SINCE THE 1990’s, AFRICAN COUNTRIES AND FOOTBALLERS HAVE FEATURED FAR MORE AT WORLD FOOTBALL’S TOP TABLE.

Although no African team is yet to reach further than the quarter finals at the World Cup, their individual footballers have been recognised for their talents.

In 1995 George Weah became the only African player to ever win FIFA World Player of the Year, while other players such as Roger Milla and Jay-Jay Okocha dazzled at some of Europe’s elite clubs.

The aforementioned players paved the way for today’s African footballers to make their mark on world football and for some to be considered amongst the greatest of their generation.

Such talent has invariably seen them be well rewarded financially and many of Africa’s modern day greatest feature on this list of Africa’s richest current footballers. Veijeany Christopher Samba (born 28 March 1984), known as Christopher Samba, is a professional footballer who plays as a defender for FC Dynamo Moscow in the Russian Premier League. Born in France, he plays for the Congo national team. The Congolese defender’s wealth owes greatly to the contract he signed at Anzhi Makhachkala where he was paid $160,000 per week. Before then he made his name as the no nonsense captain of Blackburn Rovers. Between two spells at Anzhi he spent six months at Queens Park Rangers, where he again earned around $160,000 a week. He is currently at Dynamo Moscow after being sold in a fire sale of players by Anzhi. Seydou Keita (born 16 January 1980) is a Malian professional footballer who plays for Italian club A.S. Roma. A versatile midfielder, he can operate as both a central or defensive midfielder, and played most notably with Lens (five seasons) and Barcelona (four), winning 14 titles with the latter. Keita represented Malian national team since the age of 20, appearing with it at seven Africa Cup of Nations tournaments, and also holds a French passport. The Malian midfielder has recently returned to Spain with Valencia after a year in the Chinese Super League. Keita earned a reported $16million before tax in his year with Chinese Super League club Dalian Aerbin FC. Before that move he had been an important member of the Barcelona squad for four years having impressed at Sevilla and in the French Ligue 1. Frédéric Oumar Kanouté (born 2 September 1977) is a retired Malian professional footballer who played for several top-tier clubs within UEFA, enjoying his greatest success with La Liga side Sevilla FC. Kanouté was named the 2007 African Footballer of the Year, the first player born outside Africa to win the award as well as consecutive UEFA Cups. The legendary Malian striker began his career in France with Lyon before moving to England with West Ham in 2001. He is currently at Beijing Guoan in the Chinese Super League. In 2007 he spent a reported $700,000 buying his local mosque in Seville. John Michael Nchekwube Obinna (born 22 April 1987), known as John Obi Mikel is a Nigerian professional footballer who plays as a midfielder for English club Chelsea and the Nigeria national team. After just 6 appearances for Norwegian club Lyn Oslo, Mikel became infamous within the football world. In 2005 both Manchester United and Chelsea announced the signing of 18 year-old Mikel in what would become a protracted transfer saga. It was eventually settled in 2006 with Chelsea paying Lyn Oslo just £4million, whilst Manchester United received £12million without the player ever having played for them. The Nigerian has achieved great success at Chelsea winning the Premier League and Champions League amongst others, and reportedly earns $5million a year.
6. KOLO TOURE – $18 Million

Kolo Abib Touré (born 19 March 1981) is an Ivorian professional footballer who plays for English club Liverpool as a defender. Born in Bouaké,Touré joined Premier League team Arsenal from ASEC Mimosas on a long-term contract for a fee of £150,000 on 14 February 2002 after a short trial. His status as a full international meant Touré was able to secure a British work permit. Toure has played for three of England’s biggest clubs in the form of Arsenal, Manchester City and Liverpool. He also has a lucrative sponsorship deal with Adidas. He has become an integral player for the Côte d’Ivoire national team and is one half of football’s highest paid siblings.

Michael Kojo Essien (born 3 December 1982) is a Ghanaian footballer who plays for Panathinaikos and the Ghana national team. He is a midfielder who has often been touted as a box-to-box midfielder for his ability to exert energy in supporting offensive and defensive play and for his tough tackling style which has earned him the nickname “The Bison”. Essien can also play as a defender, both on the right of defence and in the centre. Essien was once Africa’s most expensive footballer of all-time after his £24.4million move from Lyon to Chelsea. He has received multiple nominations for World Player of the Year as well as African Player of the Year in recognition of his status as one of Africa’s best players ever. After 8 years at Chelsea, Essien signed for AC Milan in January 2014 to receive more first-team football.

Sheyi Emmanuel Adebayor (born 26 February 1984), known as Emmanuel Adebayor, is a Togolese footballer who plays as a forward for Premier League club Tottenham Hotspur and the Togo national team. Adebayor previously played for Metz, Monaco, Arsenal, Real Madrid and Manchester City. He was voted African Footballer of the Year for 2008. Togo’s all-time top scorer has benefited from lucrative contracts at some of England’s richest clubs. Whilst at Manchester City the striker earned a reported $268,000 a week. While Adebayor has developed a reputation for falling out with managers, the player is also known for his enormous charity work. He has set up projects in his native Togo and across Africa, as well as founding the SEA Foundation which implements welfare projects across the continent.

Gnégnéri Yaya Touré (born 13 May 1983), known as Yaya Touré, is an Ivorian professional footballer who plays as a midfielder for English club Manchester City and the Ivory Coast national team. Toure has received African Player of the Year three consecutive times since 2011 and is recognised as one of the Côte d’Ivoire’s ‘Golden Generation’. He was an important player in the Barcelona team that won the Champions League in 2009 and is currently the engine room of Manchester City’s team. He earns a reported $15million a year to reinforce his status as one of the world’s best. 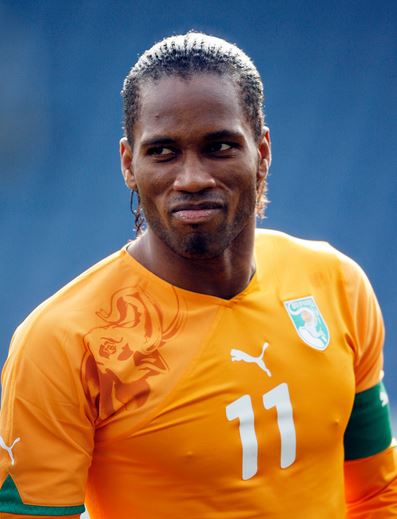 Didier Yves Drogba Tébily (born 11 March 1978), known as Didier Drogba, is an Ivorian professional footballer who plays for English club Chelsea as a striker, and is the all-time top scorer and former captain of the Ivory Coast national team. He is best known for his career at Chelsea, for whom he has scored more goals than any other foreign player and is currently the club’s fourth highest goal scorer of all time. Didier Drogba’s enormous fortune is impressive, considering the Ivorian didn’t earn a big move until his 2004 transfer to Chelsea at the age of 26. Since then however the Chelsea legend has signed a number of lucrative contracts. At the height of his powers at Chelsea he was paid $170,000 a week, a figure dwarfed however by the staggering $325,000 he earned in his short spell at Shanghai Shenhua. He earns $5.2million a year at Galatasaray, however with a number of lucrative sponsorship deals his actual earnings a year are far more. 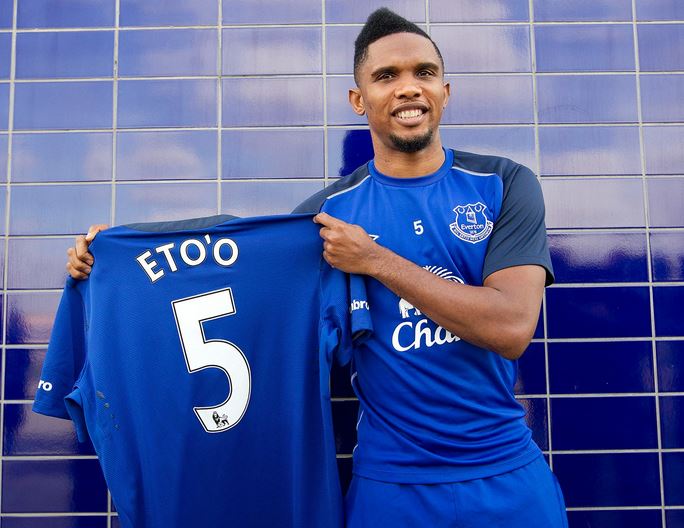 Samuel Eto’o Fils (born 10 March 1981) is a Cameroonian footballer who plays as a striker for Sampdoria and formerly for the Cameroon national team. He is the most decorated African player of all time having won the African Player of the Year award a record four times: in 2003, 2004, 2005, and 2010. He was third in the FIFA World Player of the Year award in 2005. It’s no surprise that the man to have won a record four African Player of the Year trophies tops the list for the continent’s richest player. Eto’o was in fact once the highest paid player in the world during his spell with Anzhi Makhachkala bringing in $25millon a year. Goal.com put his net worth at $118 million (£70m), but given his extravagant lifestyle and his donations to several charity organizations we put the net worth at $90 million.The Cameroonian striker has played for some of Europe’s biggest clubs including Real Madrid, Barcelona, Inter Milan, Chelsea and Everton (his current club). His goal-scoring prowess has seen him not only rewarded with mega wages but huge sponsorship deals, however the player also gives a lot of money to charity, much like Didier Drogba, and has set up the Samuel Eto’o Foundation in his home country.