Super Eagles Head Coach, Sunday Oliseh said the constant change of players in the last one year had made it difficult for the country to have a formidable squad. 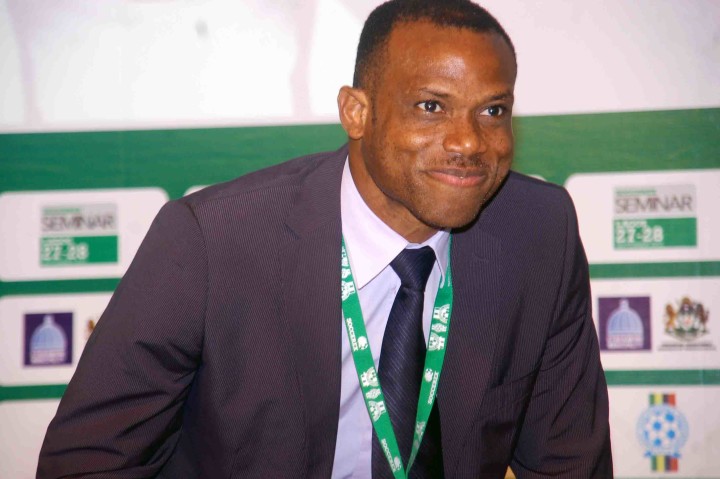 Oliseh made the remark during the team’s interactive session with the media in Abuja on Thursday.

He, however, assured that a formidable team would be in place with time as the technical crew had decided to give their best to ensure that Nigeria qualified for the AFCON 2017.

The coach said he would take full responsibility should the team fail to qualify for the 2017 Africa Nations Cup (AFCON) scheduled to take place in Gabon.

He said that it was usual for the head coach and his assistant to bear every consequence having produced the team list.

“We made the list and sent it out to Nigerians personally and as far as we are concerned, we are working hard to get these players together’’, he said.

Oliseh said no player would be given preferential treatment as long as he was in charge, adding that foreign and home-based players were Nigerians.

He said what would guarantee a player’s position in the team was performance.

The former Juventus FC of Italy player pleaded with Nigerians to give him and his coaching crew enough time to build a formidable team for the country, saying that they took over from ground zero.

“When we started training on Monday with the domestic, I had my hands on my head and I knew there was so much work to do.

“We did a video work with them on Monday and on Tuesday when we came out for training, what I saw was good; this is just in one day.

“The boys are very motivated, they improve a lot in their play but then we need time.

“This is because when you take over a club, you have some regular players, maybe seven or eight to work with together with three or four from the youth team and you are good.

“That is in a normal situation, but in our case, we are starting from zero’’, Oliseh added.

On the exclusion of Obi Mikel from the list of invited players for the AFCON qualifier against Tanzania, Oliseh said Mikel refused to contact him in spite of repeated calls and messages.

He said: “I called Mikel up to four times but nobody picked it up; I sent him an SMS, I got no response. I also called Victor Moses and he picked.

“I spoke with him and told him to concentrate on his game and that we will meet after his game.

“After the game, he came to my hotel room and I made him to understand that my priority is building a new team and that everybody is starting from zero.

“I told him that I needed to see my players playing.

“Throughout my stay in England, I never got a call or message from Mikel; it was just few days back when I was checking my phone that I missed call from him.

Oliseh pointed out that not even Mikel or any other foreign-based player would be treated differently.

“For me, everybody is the same; one thing is clear, if anybody will play for the Super Eagles, they will be treated the same way.

“That is why I said there is nothing like home-based or foreign-based professionals; what I know is that Nigerians exist and if you are the better Nigerian, then, you play”, he said.