Nigerian champions Kano Pillars finally had their home invincibility of 12 years brought to an end by a modest Nasarawa United side in the Glo Premier League on Sunday.

The Kano club have had close shaves in succumbing at home in recent times but they had managed to keep their run going until Sunday when Nasarawa United defeated them 2-1 – a feat most pundits never saw coming from the Lafia club.

Kano Pillars head coach, Mohammed Baba Ganaru, who interestingly had just switched from Nasarawa United in the mid-season transfer window, named Gambo Muhammed in the match day squad for the first time this season after he recovered from an arm injury he sustained when the team were attacked by gunmen in March this year before the start of the season.

The champions began like a house on fire as Adamu Mohammed was felled in front of Nasarawa United’s box by Seun Sogbeso and Rabiu Ali’s quick free kick was saved by goalkeeper Danladi Umar.

It was Bala Zakka’s turn to cross the ball into the area and Umar plucked it out of the air before any Pillars player could pounce.

At the other end, Ifeanyi Nweke forced Theophilus Afelokhai into a save from a chipped effort.

Nasarawa United began to assert themselves as it became clear that the champions were not invincible at the Sani Abacha Stadium in Kano after all.

On 12 minutes, Ubale stunned the hosts with a fine finish. It was a combined effort of two former Kano Pillars men – Ubale with the goal and Eugene Obi with the assist. 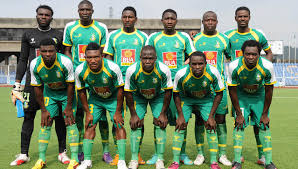 And before the Kano club could pick themselves up from conceding the first goal, Nasarawa United midfielder Yaro Bature tapped the ball into the roof past Afelokhai and this time Ubale turned provider.

Nasarawa United then revved up their engines and ran rings around the Pillars backline. Ubale, Eugene Obi and Esosa Igbinoba came close to making it 3-0 with the latter’s free kick coming off the woodwork as they took the two-goal lead into the break.

Right after the break, Rabiu Ali pulled one back for the champions to give them a lifeline.

Goal attempts by Adamu Mohammed, Ubong Ekpai, Eneji Otekpa and Rabiu Ali could not bring Pillars on even terms. The introduction of Gambo Muhammed also could not salvage a point as the Kano club’s 202 unbeaten home run came to a shocking halt.

The last team to beat Kano Pillars at home in the Nigerian top flight was Julius Berger FC who won 2-1 on June 21, 2003.

The Kano Pillars unbeaten streak at home lasted for 12 years and 44 days.