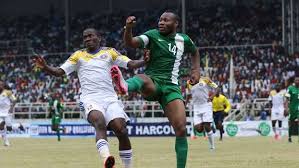 Guinea beat Nigeria 1-0 in Rubavu on Tuesday for the home-based Super Eagles to crash out of the ongoing fourth edition of the Championship of African Nations (CHAN) in Rwanda. In the group’s other match, Tunisia thumped Niger Republic 5-0 in Kigali to join Guinea in booking their places at the knockout stage from Group C. Tunisia’s Carthage Eagles however, topped the group with superior goals in spite of finishing on five points apiece with Guinea, who finished in second place. Nigeria had four points, while Niger Republic ended at the bottom with one point. Guinea who were making their debut plotted one of the tournament’s major upsets so far by edging the highly-rated Nigerians through Ibrahima Sankhon’s strike just before the break. The striker who was adjudged the match’s Most Valuable Player tucked home a cross from Aboubacar Sylla on the stroke of half time. The hotly contested game saw few chances with Guinea starting on a promising note only for Nigeria to come in the picture shortly after. The first half recorded a handful of chances from either side until Sankhon scored just before the interval. Nigeria’s coach Sunday Oliseh introduced striker Chisom Chikatara for Paul Onobi after the recess. The former, who had scored four goals from the previous two games, made his presence almost felt with surging runs upfront. Guinea goalie Abdoul Aziz Keita pulled the save of the day seven minutes from time by pushing out substitute Bright Uchechukwu’s thunderbolt for a corner kick. In Kigali, Tunisia were simply too much for Niger Republic who finished the game with 10 men after Oumarou Balley was sent off on 74 minutes for a second yellow card. The 2011 champions led 2-0 at half time, thanks to a Saad Bguir brace. Ahmed Akaichi increased the tally on 79 minutes before Mohamed Ben Amor took the game beyond ‘Les Menas’ two minutes later. Hichem Essifi completed the goal harvest with the fifth on the stroke of full time.