A teenager now 16 years, was down as she explained to a jury how she tried to protect footballer Adam Johnson (England player) from losing everything after sexual encounter in his car. 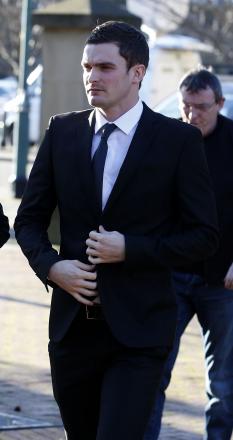 She sobbed bitterly as she was accused of lying about the incident in the 28-year-old former Sunderland winger’s Range Rover on January 30, 2015.
Last week, Johnson admitted grooming the teenager and has pleaded guilty to one count of sexual activity with her when she was 15.
But he denies two more serious counts of sexual activity with her.
Johnson’s barrister, Orlando Pownall QC questions makes her to break down twice after the video link that reveal their secret meeting was revealed.
She became upset as she explained how she began to panic when rumours began to circulate about what she and Johnson had done.
“I was concerned because I didn’t want him to lose his career or anything. I wasn’t bothered about myself in it all.” The girl explained.
The girl said she was trying to contain the situation so no-one would find out what happened and Johnson “wouldn’t lose everything’ but she agreed with Mr Pownall that “everything spiralled out of control”.
The teenager said: “I was worried about everyone finding out about it. I was trying to cover the whole thing up.”
The girl sobbed as she explained what she had told her friends about what happened and Judge Jonathan Rose adjourned the case for the day.
Earlier, the judge took another break when the girl became extremely upset after Mr Pownall asked her why she had asked friends to lie for her.
Before she became upset, the girl told the jury: “I wanted to keep him (Johnson) out of trouble. I didn’t want to get him in more trouble than he was.”
And the teenager added: “I was scared that people wouldn’t believe me.”
She said: “I didn’t want to believe that it had happened.”
Just before the girl broke down, she told the barrister: “I didn’t realise what had gone on was wrong.”
Mr Pownall opened his cross-examination of the girl by saying: “It is accepted that you have been seriously wronged by Adam Johnson.”
Earlier, the jury was played two video recordings of police interviewing the girl about what happened to her and how it began.
In the first, the girl explained how she first met up with Johnson – who she said she idolised – on January 17 last year and he signed two Sunderland shirts for her.
She described how Johnson exchanged WhatsApp messages with her after their first meeting, saying “you owe me for this” and “am I going to get a thank you kiss?”.
The teenager said that at the second meeting Johnson said to her: “I’ve come for my thank you kiss.”
She said they started kissing and then: “He undid the button on my trousers. It took him a while to do that. He got his hand down my trousers. He started to put his hands in my knickers.”
The girl then described to the officer further sexual activity between the pair.
The teenager told the officer that Johnson knew how old she was and added: “He asked me when I was 16.”
The jury of eight women and four men was played a second police interview during which the teenager described more serious alleged sexual contact between her and Johnson during the same meeting in his car.
The woman police officer asked her how she felt. She said: “Not very good. I was disappointed in myself.”
When the officer asked her why she did not mention the more serious sexual contact in the first interview, she said that there was evidence on text messages to back up everything else she said but not this sex act.
She also said that rumours had begun to circulate about the other sexual activity but not about this. She said she was worried that talking about it “would only make it worse”.
The girl will continue giving evidence on Tuesday.
Last week, the jury heard how Johnson, of Castle Eden, Co Durham, sat in the dock watching the girl give her account on two large video screens in the court.
He was wearing a dark blue suit, with a white shirt and a dark tie.