Coach Samson Siasia has barred defender Segun Oduduwa and midfielders Stanley Dimgba and Usman Mohammed from showing up at the Bolton White Apartments camp of the Super Eagles, after they reported late to the camp of the U-23 team without an earlier permission. 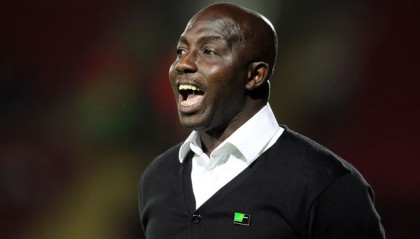 “We cannot have those three in camp anymore. This is very serious business, and only serious –minded persons can be involved. They reported late to the camp of the U-23 team, so they cannot be tolerated in the camp of the senior team.

“I have said it over the past few days that the right mentality would count big among the traits we are looking for in the players to feature against Egypt.”

All three players were in the U-23 squad that won the Africa U-23 Cup of Nations in Senegal in December 2015.

The Super Eagles’ new boss is known to be a disciplinarian. He threw out star midfielder Kingsley Sokari and talented forward Daniel Etor from his squad to the Africa U-23 Cup of Nations after the duo opted to play for their club, Enyimba FC, in a final NPFL season game in Lagos in November 2015, against his instructions.

The exclusion of the trio means only 40 players are now in contention for shirts in the 2017 Africa Cup of Nations double date against Egypt, with 19 home boys to train for two weeks before the arrival of 21 overseas –based players on the week of the first game in Kaduna.