The Super Falcons striker has appealed for more investment in women football at the grassroots in Africa during her address at a FIFA conference in Switzerland on Monday. 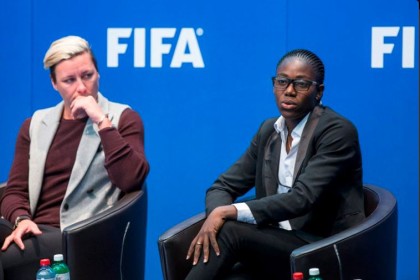 Asisat Oshoala in a FIFA conference on Developing Women Football

Nigeria international Asisat Oshoala believes remarkable progress will be made world over in the next five years, if women’s football gets more financial support at the grassroots, especially in Africa.

The 2014 CAF Africa Women Player of the Year was among a raft of football legends and top personalities who spoke at the FIFA Women’s Football and Leadership Conference, Switzerland on the title ‘Equality Through Reform’ geared to taking women’s football to the next level in Monday morning’s session.

Oshoala featured alongside 2012 Fifa Women’s World Player of the Year, Abby Wambach, Samar Nassar (Chief Executive Director of the Local Organising Committee for the FIFA U-17 Women’s World Cup Jordan 2016) and Brigitte Henriques (General Secretary of the French Football Association) on various channels in which women in football can be further promoted.

The 21-year-old lamented the poor place of Africa in the development of women’s football, citing lack of infrastructure, sponsorship and organization as major challenges of the continent, especially her country, Nigeria.

She, however appealed to FIFA, African leaders, football administrators and football legends to give a helping hand to moving the women’s game forward, assuring she is willing to do more in her capacity.

“Football is creating a lot of opportunity for youths,” Oshoala said, stressing that ” football has helped us to meet people not just in Africa, Nigeria or the world [and] to make the world more fun.

“Religious beliefs in Africa, Nigeria to be precise, there are some parts that believe women are not expected to be involved in sports. There are also cultural beliefs that women are not supposed to play football because it could get them stressed out.

“There’s nothing you can tell these people, they will tell you that their kids are not going to play football. That football is for the men not women.

“We have poor facilities in Africa, talking about the pitches. We sometimes play on sandy and rocky pitches which matters.

“The grassroot is the future of football. That’s what I believe. It’s not about what you get now, but it’s about what you can give in now and get later.

“So we all need to invest in women’s football. If we can invest now, in the next five years we can celebrate the success. I think this more of the things you need to do.

“Sometimes I tell people that you don’t have to wait for your federation to do things, I organized an U17 women competition without the support of my federation. If 100 people can do that, I think we will achieve a lot more in five years.

“This is a different project for us (women). We can talk to FIFA about having women publications to showcase women football stars and game as well as attract sponsorship and encourage business.

“I’m here representing Africa, the moving forward of women football in Africa begins with me. I accept that as a responsibility. Next when I’ll be here I will be glad that I said it here and it happened.

“I want to say to everyone to please do whatever you can do to help move women’s football forward. Please do it. I’m not going to wait any longer.

“Don’t worry about what’s going to happen now because the start may be difficult but I know in the future we will be happy at the end,” she concluded.

Her exploits for club and country in 2014 paved way for her switch to England where she signed for Liverpool Ladies, becoming the first home grown female player to achieve such a feat.

She edged legendary Marta of Brazil and other top stars to the maiden 2015 BBC Women’s Football of the Year award.