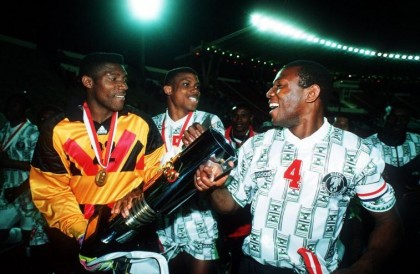 Uche Anichukwu, Abuja: The Deputy President of the Senate, Senator Ike Ekweremadu, has expressed shock and sadness over the death of the former skipper and coach of the Super Eagles, Mr. Stephen Keshi.

The Senator, who said Keshi represented the best generation of the Super Eagles so far, further described the ex-international’s death as a big blow to Nigerian football.

He noted that late gaffer made Nigeria proud, not only as a successful captain and coach of the Super Eagles, but as one of the first crop of Nigerian players to export Nigeria’s football prowess to the world as a professional player.

He said: “Keshi captained a generation of Super Eagles that was truly superlative in performance and bestowed on the national team the international fame, respect, and grandeur it enjoys till date.

“He captained the Super Eagles to the 5th place in FIFA ranking, possibly the best by any African country so far, and capped it up by leading a younger generation of the national team to a successful campaign to the Africa Nations Cup in South Africa.

“His death is, therefore, a big blow to us as a nation. Keshi deserves our prayers for the peaceful repose of his patriotic soul; and he indeed deserves immortalisation by a country he served so fervently, patriotically, and unreservedly”.

The Deputy President of the Senate, however, called on stakeholders in the Nigerian football industry to use this period of mourning to embark on sober and deep reflections on the tumble in nation’s football fortunes.

Ekweremadu prayed God to grant Keshi’s immediate family and the entire nation the equanimity to bear the irreparable loss.