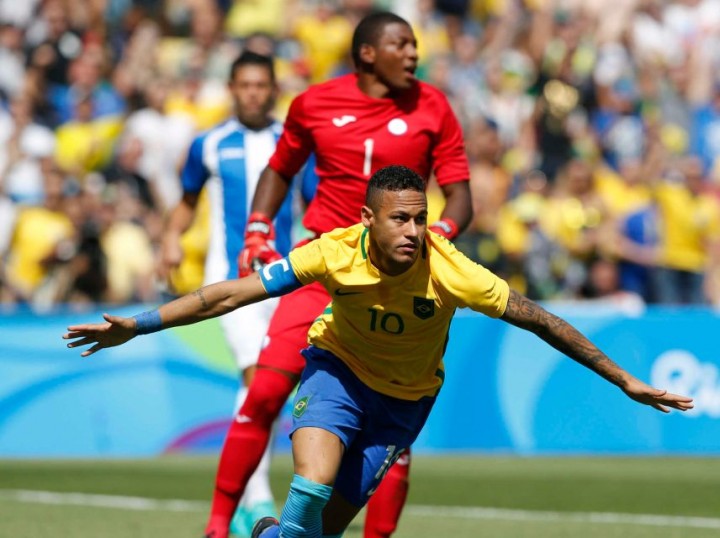 In the men’s football, Brazilians were treated to a feast of Joga Bonito(Portuguese for play beautiful), as the host nation thrashed Honduras 6-0 in a very scintillating semi-fianl to reach the final against Germany, where they will have a chance to avenge the 7-1 defeat from the 2014 World Cup.

On a broiling afternoon at the Maracaña, Brazil’s ever-mercurial footballers had a taste of how a tournament semi-final on home soil should end. Not as it did at their ill-starred World Cup in 2014, when a 7-1 defeat to Germany reduced grown men to traumatised husks, but with a free-wheeling exhibition against a Honduras side who took just 16 seconds to capitulate. The ghosts of that night in Belo Horizonte live on, but the raptures heralding the Brazilian advance to a fourth Olympic final suggest that the fragile bond between players and public is at least starting to be restored.
With the fastest goal in Olympic history, Neymar led Brazil back to the gold-medal match.

Neymar opened the scoring for Brazil, racing onto a centre-back taking way too long on the edge of his own box, stealing the ball from him and poking the shot past the goalkeeper – all within 15 secs of match time, a new olympics goal record.

Neymar takes a massive hit as he lands on his chest after the fall and has been stretchered off – he was not substituted but looks in a lot of pain. He got back to play after 3 minutes.

New Man City signings Gabriel Jesus then slotted the ball past the Honduras keeper, racing onto a through ball as the defence falls apart. Honduras fell apart here and have also lost their discipline – several players have been booked and are incredibly wound up about the free-kicks they keep conceding.

Gabriel Jesus gets a second! Honduras then started sinking out of sight deep into the sea of goals, here. And if the scoreline wasn’t bad enough, there is also absolutely no way this game would have ended with 22 men on the pitch. Honduras were starting/continuing to lose their rag on the pitch.

Honduras are lucky not to concede a penalty and then even more fortunate that they don’t concede an actual fourth goal straight after. If you like goals, find a way to watch the Brazil vs Honduras game. But maybe not if you’re Honduran.

It was never really in doubt but Brazil will definitely win either silver or gold in the football. Marquinhos slammed a goal home from inside the area and Honduras will be really well to keep the score to four.

Neymar hits a free-kick from 25 yards, gets it over and around the wall and the ball strikes the back of the net. It looks like a goal until you realise nobody is celebrating. Replays show the ball hits the side netting and rolls along the back of the net giving the illusion it’s in basically what I’m saying is that it’s still 4-0 and it wasn’t a goal.

Eventually, the final score is 6-0 to Brazil. Slightly better scoreline for the home nation than that match they played against Germany in 2014.