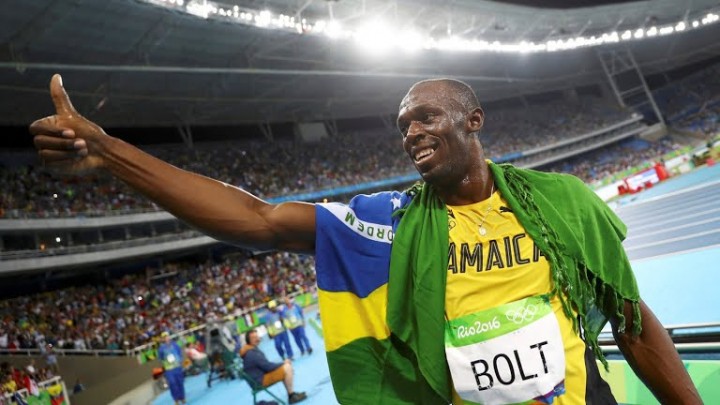 Usain Bolt successfully defied a natural phenomenon, lightning can indeed strike in same place thrice. Well, that will be true if Bolt equals ‘lightning fast’, which we all need no further proof!

The Olympics report(CBC) on the 200-metre final went as scripted, with Usain Bolt proving his dominance yet again Thursday and Canada’s Andre De Grasse delivering another message to the sprint world.

“I am trying to be one of the greatest. Be among [Muhammad] Ali and Pelé. I hope to be in that bracket after these Games.”, Usain Bolt stated during press interview after the race.

The Jamaican ran the 200 in 19.78 seconds to easily win his third straight Olympic title in the event, adding to gold from Beijing and London. It also brings his career gold medal tally to eight, including his 100 victory on Sunday.

De Grasse, from Canada, comfortably took silver with a time of 20.02, a second Olympic medal to pair with his 100 bronze.

France’s Christophe Lemaitre was awarded bronze, edging Great Britain’s Adam Gemili in a photo finish after both were given a time of 20.12 seconds.

Afterwards, Bolt declared it his last individual race at the Olympics ahead of his retirement next year. He can add another medal in the 4×100 relay final on Friday. The Canadians also qualified.

“I’ve proven to the world I’m the greatest. This is what I came here for. That’s what I’m doing. This is why I said this is my last Olympics — I can’t prove anything else,” said Bolt.

“What else can I do to prove to the world I am the greatest?” he added. “I am trying to be one of the greatest. Be among [Muhammad] Ali and Pelé. I hope to be in that bracket after these Games.”

It was a pure foot race, with slower times the result of a damp track and a -0.5 m/s head wind.

And it was clearly Bolt’s race halfway around the bend, obliterating any ideas the 21-year-old Canadian might have had of beating the king.

A small storm of anticipation had built around the final, arising from De Grasse’s unorthodox challenge of Bolt in their Wednesday semifinal. They grinned at each other as they ran across the finish line in that race, Bolt winning, De Grasse in a Canadian record 19.80.

“Yesterday I felt so good, ran a personal best, and today I felt pretty good in my warm-up and I tried to execute the best way I know how and I just came up a little bit short,” De Grasse said, belying his desire to win.

“I was ready to try to challenge [Bolt] and he just ran away from me and I couldn’t catch him. It is what it is.”

If it sounds like disappointment, it was. And that sentiment was echoed by De Grasse’s coach Stuart McMillan.

He also said he told De Grasse to challenge Bolt in their semifinal to “rattle his cage,” believing his younger runner would recover faster.

And tonight Bolt stamped out all doubters, if there were any. Again, without doubt, Usain Bolt is the best.

NEWER POSTRochas Okorocha: I was not attacked by ‘a ghost’
OLDER POSTUS Secretary of State, John Kerry to visit Nigeria over Boko Haram, Economy