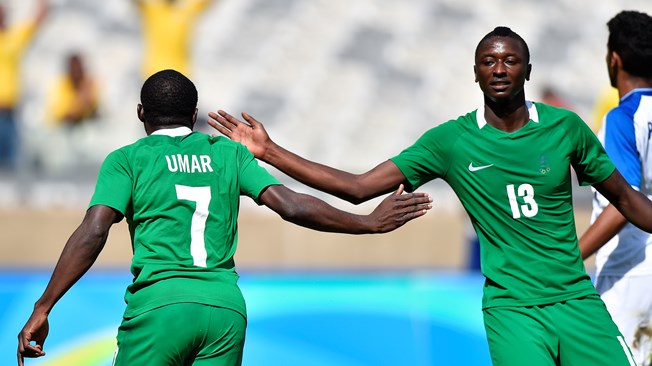 Mikel Obi, midfielder, lead his Nigeria teammates out in Mineirão against Honduras, who were thrashed 6-0 by hosts Brazil in their semi-final match, in the men’s bronze medal game.

Samson Siasia’s side enjoyed a three-goal advantage shortly before the hour mark thanks to Sadiq Umar’s brace and Aminu Umar’s 49th minute goal, but Honduras gave the African side a late scare as Antony Lozano and Marcelo Pereira reduced the deficit to just one goal.

Nigeria started brightly and put Honduras under early pressure. They came agonisingly close to taking the lead on seven minutes when Mikel John Obi found Aminu Umar, whose effort struck both posts. Umar had another good opportunity minutes later but was denied by goalkeeper Luis Lopez.

Honduras were not without their chances, however, and Nigeria shot-stopper Emmanuel Daniel was called into action to deny Alberth Elis on 11 minutes. The forward then had a golden opportunity on 33 minutes when he broke through the Nigeria defence with his blistering pace but Daniel held firm to deny the Olimpia man.

Meanwhile at #Rio2016, @mikel_john_obi and Nigeria have won #bronze at the Olympic football tournament. Congratulations!

The Central Americans were made to rue that missed opportunity as Nigeria took the lead just a minute later. Mikel demonstrated his splendid technique by dribbling into the box and finding Sadiq Umar, who fired the Africans into the lead.

Aminu Umar doubled Nigeria’s advantage four minutes after the break, while Sadiq Umar’s second of the game left Siasia’s side cruising on 56 minutes.

But Honduras soon showed they were not down and out. Lozano pulled one back for Jorge Luis Pinto’s side on 71 minutes, before Pereira cut Nigeria’s advantage to just one goal after heading home Oscar Salas’ free-kick. The fightback was not enough, however, as Nigeria held firm to secure their first Olympic medal since Beijing 2008.