Super Eagles Technical Adviser, Gernot Rohr, has expressed optimism in the ability of his team to deliver in Sunday’s 2018 World Cup qualifier against Zambia in Ndola. 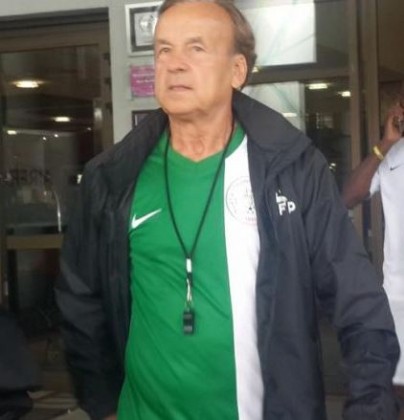 Rohr expressed the optimism on Friday during the team’s interactive session with the media.

He said that Nigeria was blessed with abundant talents and as such was expecting an outright victory over the Chipolopolo of Zambia in theWorld Cup qualifier.

Rohr assured Nigerians that the Eagles presently in camp are capable of defeating any team.

The German tactician revealed that Arsenal forward, Alex Iwobi, would lead the attack against the Zambians on Sunday.

He assured that as professionals, the players would adapt to the bad playing pitch in Ndola.

“We have six new players and three will perhaps start the game.

“You know that a player like Iwobi was injured last time but we all know that he is a good player and I hope his integration in the team will produce result in Ndola.

“The training has been good and we try to help and bring him into the team; he knows how we played in Uyo and we cannot change tactically because the time is short.

“We have other strategies but similar with what we did in Uyo and I count on Iwobi to help us win the game in Ndola.

“We must avoid the mistake in Uyo where we had 27 shots on goal but converted only one goal and this means that we must have a good attack and players who can score,” Rohr said.

He also said that the technical crew had watched the latest video of the Zambian national team.

“We have secured the video clips of their last five games and have gone through them.

“We are also aware that they have changed coach and should expect a different thing but the good thing is they are the same players.

“We know that they are very strong in attack and we have worked on the best tactics to win them but what is undisputable is that they are also a strong side.

“Having missed the Nations Cup, Zambia will want to make a statement with the World Cup qualifiers because they also want to win.

“They are motivated like Nigeria but I think that we are hungrier than them,” he added.

Rohr who admitted that the Eagles started camping late noted that the international experience of most of the players would be an added advantage to the team on Sunday.

The former Gabon national team coach said that there were no injury worries in the team ahead of the encounter.

He said: “A player like Musa Mohammed played more than the others during the friendly game and we have to work on him because we don’t have lots of right backs though we have started searching.

“All the players are fit including the ones that reported to camp with minor injuries. We are ready for the game,” he said.

The Eagles will depart Abuja for Ndola, Zambia on Saturday for the encounter.