The Super Eagles of Nigeria today in far away Ndola, Zambia started their 2018 World cup qualifying campaign on a winning note. The eagles defeated their host, the Chipolopolo of Zambia by two goals to one. 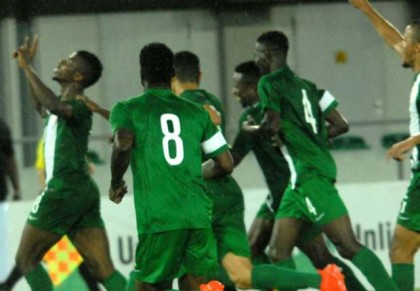 The Super eagles in the first half, played some of their best football as the trio of Iwobi, Iheanacho and Moses Simon gave the Zambian backline a torrid time.

It was Alex Iwobi who opened scoring at the 32nd minute with a sublime volley. Kelechi Iheanacho compounded the of the host’s  wore when he took out three defenders to hand the eagles their second goal at the 41st minute.

The second half saw the Zambians turn the heat at Nigeria’s defence and their effort payed off at the 71st minute as Mbesuma’s strike found the back of  Nigeria’s net.

Captain Mikel Obi  was  irrepressible at the center for Nigeria. He was denied a goal by the Zambian  goalkeeper during the encounter.