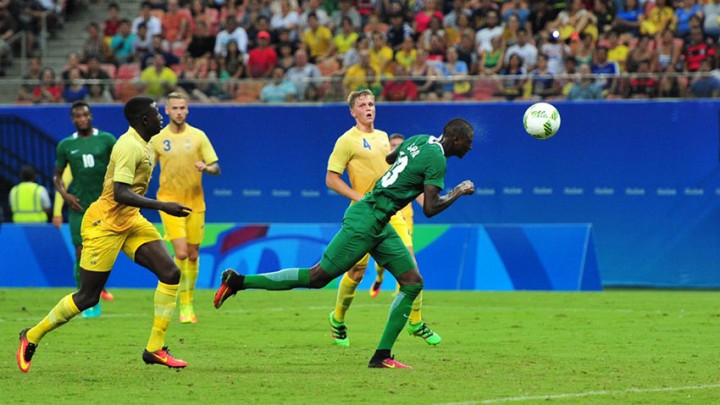 Nigeria started on the front foot, holding possession and putting pressure on Sweden’s defense. Nigeria almost took the lead as forward Sadiq Umar gotin on goal against Swedish goalkeeper Andreas Linde, but the keeper was up to the challenge.

In the 23rd minute Sweden had its best scoring opportunities of the first half as Mikael Ishak made a run behind Nigeria’s backline, but his volley attempt went wide of the goal.

Sweden had few chances the rest of the half as Nigeria established control in the match.

Nigeria’s Oghenekaro Etebo, who had four goals in his team’s first Olympic match, had a golden opportunity in the 36th minute. Imoh Ezekiel found Etebo wide open in the box, but he sent his header just over the crossbar.

Just a few minutes later Umar put Nigeria in front. Stanley Amuzie sent in a curling cross to Umar who placed his header past Linde.

Early on in the second half Sweden’s Linde was forced into multiple diving saves to prevent Nigeria from building on its lead.

First, Nigerian captain John Obi Mikel sent a hard strike toward the goal. Then, minutes later, Linde got his fingertips to an Etebo shot that was heading for goal.

Despite the small margin of victory, Nigeria dominated Sweden throughout. Nigeria had 10 shots on goal compared to Sweden’s one and held 56 percent of the possession.

Nigeria now has six points and is in a great position to advance to the quarterfinals. Sweden remains at one point.

Next up for Nigeria is its final group stage match against Colombia on Tuesday at 6:00 p.m. ET. Sweden plays its next match on the same day and time against Japan.