History of the Gold, Silver and Bronze Medals in the Olympics

Chioma Ajunwa at Atlanta ’96, After winning Gold in Long Jump

While we all still waiti for one of our Nigerian athlete to win a medal in the Rio 2016, as a proof of excellence; unlike the United States which has amassed 24 gold, 18 silver and 18 bronze thus far, with China half-way behind and Great Britain in third place. Why are we all so crazy about the medals – truth is, in the beginning there was really no medal for winners – they got ‘leaves’ decorated crowns.

According to Dictionary.com, at the first Olympic Games back in 776 BCE, competitors did not receive medals. Instead the top athletes were crowned with wreaths made of olive leaves. This tradition continued until Roman emperor Theodosius I (or perhaps his son) abolished the Olympics around the year 400 CE. The revival of the Olympics dates from the late 19th century, with the first modern Games taking place in 1896. The awarding of medals arose around this time as well, though its roots lie in ancient Greek mythology. 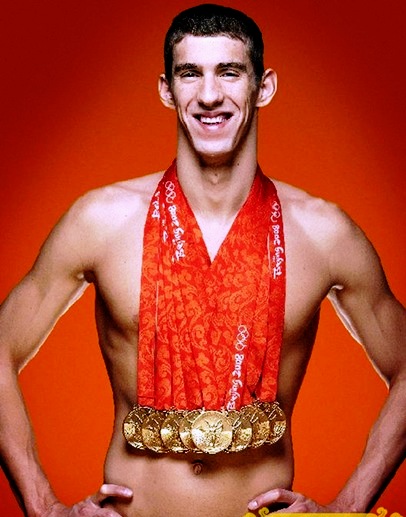 The materials gold, silver, and bronze play a major role in the Ages of Man, which form the basic timeline of Greek mythology. The Golden Age refers to a time when men lived among the gods in peace and harmony. The Silver Age is characterized by impiety and human weakness, and in this time, youth lasted 100 years. The Bronze Age marks a period of war and violence. Following these ages are the Heroic Age (the time when the heros of the Trojan War lived) and the Iron Age (modern times). The Greek poet Hesiod includes all five ages in his famous didactic poem Works and Days, written around 700 BCE. However Ovid’s Metamorphoses, written around 8 CE, omits the Heroic Age.

Gold has long been thought to be a precious metal thanks to its scarcity and its luminous color. In his play Plutus, first produced in 408 BCE, comic playwright Aristophanes jokingly suggests that the winners of the Olympics would receive gold as their prize, if only Zeus weren’t so poor:

Why, Zeus is poor, and I will clearly prove it to you. In the Olympic games, which he founded, and to which he convokes the whole of Greece every four years, why does he only crown the victorious athletes with wild olive? If he were rich he would give them gold.

Perhaps this humorous passage, or others like it, inspired the fathers of the modern Olympic Games to present gold to the top athletes, though the implementation of this coveted prize didn’t happen right away. At the first modern Olympic Games, which took place in Athens in 1896, winners received silver medals and olive branches (there wasn’t enough money to mint gold ones), and the runners-up received bronze medals. The second modern Games took place in Paris in 1900, and winners actually received valuable paintings and works of art rather than gold medals. Four years later in St. Louis, the first-, second-, and third-place athletes were awarded the gold, silver, and bronze medals. The tradition of awarding solid-gold medals to champions was short lived, ending after the 1912 Olympics in Stockholm. The gold medals of today are mostly silver and are gilt with six grams of gold. 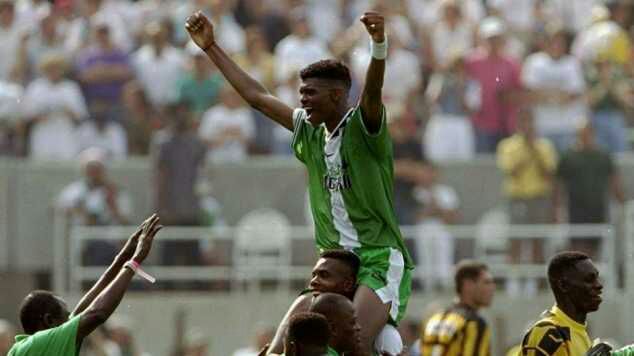 Kanu, Captain of the Dream Team – winner of the Olympic Gold in Men Football

In the 18th century, the term medal was widely used to refer to an award of recognition, though back then medals were not strictly associated with athletic pursuits. While the Olympics were not the first event to feature gold, silver, and bronze medals, this worldwide sports competition is certainly the most famous event that awards these prizes to date. 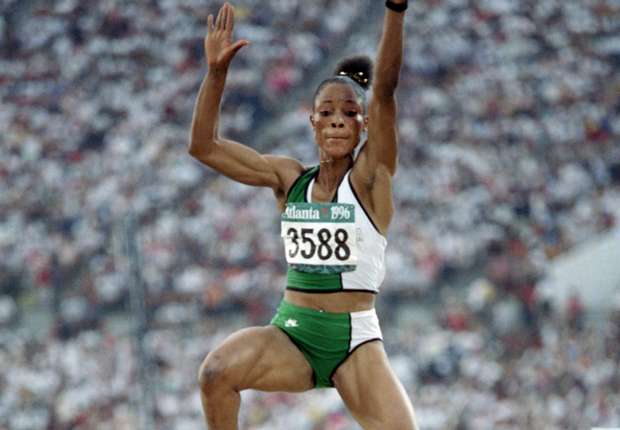 Chioma Ajunwa during the winning Jump at the Atlanta 96 Olympics

We all would wonder what a Micheal Phelps would have done with 23 leave crowns, would it have been possible to quantify his achievements, dedication or hardwork using leaves as against gold. Would we have understood the determination of a Mark Spitz or Simone Biles or our Chioma Ajunwa through leaves – perhaps we can never tell, however we would still have understood the magnitude of their various oustanding performance nonetheless.