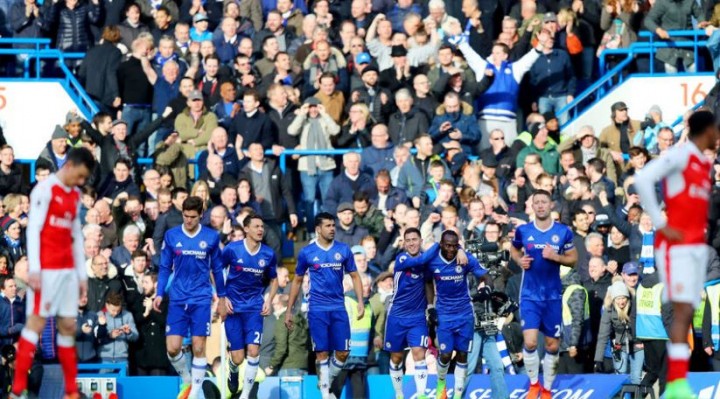 Marcos Alonso opened the scoring for Chelsea against Arsenal before a superb solo goal from Eden Hazard and a strike from Cesc Fabregas sealed victory for Antonio Conte’s men.

An Eden Hazard-inspired Chelsea extended their lead at the Premier League summit with a dominant 3-1 win over title rivals Arsenal.

Marcos Alonso gave Chelsea a 13th-minute lead, heading home the rebound when Diego Costa’s header looped up off the crossbar.

The wing-back’s robust challenge on Hector Bellerin that allowed him to score is likely to draw post-match rancour from Arsene Wenger, but the suspended Gunners manager could have no complaints when those alongside him in the stand were brought to their feet in the 53rd minute.

Hazard made his mazy way from his own half to the edge of the Arsenal six-yard box to score the kind of goal that can come to define title triumphs.

Arsenal could muster little in the way of a response as they limply succumbed to a defeat more chastening than the one they dealt out to Antonio Conte’s men in September, when the prospect of Wenger besting an elite opponent in the dugout briefly re-emerged.

At Stamford Bridge, as substitute Cesc Fabregas collected Petr Cech’s woeful clearance and lobbed into an unguarded net, it was nowhere to be seen.

By the time Olivier Giroud headed a stoppage-time consolation from Nacho Monreal’s centre, the fact Liverpool can shave Chelsea’s advantage to 10 points by beating Hull City later on Saturday felt of greater significance.

Chelsea’s measured playing out from the back has been a feature of their transformation under Conte but goalkeeper Thibaut Courtois and David Luiz passed their way into trouble in the second minute.