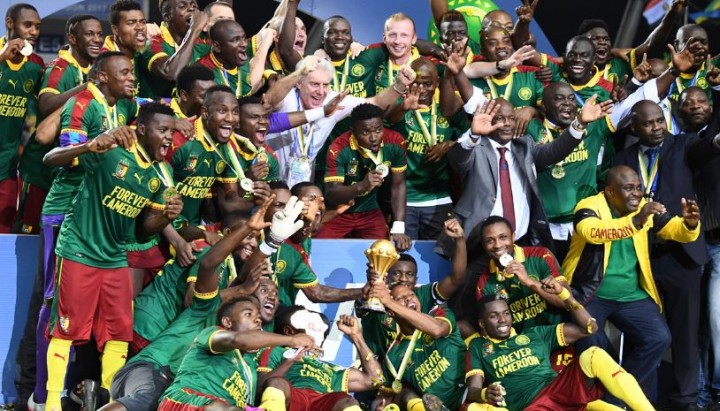 Vincent Aboubakar was the hero with a brilliant late goal, firing Cameroon to a dramatic 2-1 victory over Egypt in Libreville and their fifth Africa Cup of Nations title.

Aboubakar replaced Robert Ndip Tambe at half-time, with Hugo Broos’ side a goal down, and went on to secure the Indomitable Lions’ first championship since 2002 with a brilliant individual effort in the 88th minute.

The triumph will be made all the sweeter after seven players, including Liverpool and West Brom defenders Joel Matip and Allan Nyom, snubbed the chance to represent their country in Gabon.

Egypt took the lead in the first half when Mohamed Elneny, back in the starting line-up after missing the last two matches with a calf injury, was the beneficiary of some woeful goalkeeping from Fabrice Ondoa.

However, Cameroon showed renewed vigour after the restart and they were rewarded when substitute Nicolas N’Koulou headed home in the 59th minute.

Broos’ men continued to push and Aboubakar popped up with the winner in the 88th minute, ending seven-time champions Egypt’s 24-match unbeaten AFCON run and securing Cameroon a place at the 2017 Confederations Cup in Russia.

Egypt took less than two minutes to get in behind the Cameroon defence, but Abdallah El Said fired Mohamed Salah’s cushioned pass too close to Ondoa.

Sebastien Siani sent a tame effort at Egypt’s veteran goalkeeper Essam El-Hadary from 20 yards, and the breakthrough came at the other end in the 22nd minute.

Salah found Elneny unmarked on the right-hand side of the box and he guided a shot beyond Ondoa, who seemed to duck out the way at his near post.

Cameroon suffered another blow when central defender Adolphe Teikeu was forced off through injury, N’Koulou replacing him in the 31st minute.

Broos sent experienced striker Aboubakar on in place of Tambe for the second half and Cameroon were far more positive as a result.

Their improved attacking efforts were rewarded in the 59th minute when N’Koulou towered over Ahmed Hegazy to head Benjamin Moukandjo’s cross into the back of the net.

Cameroon continued to push for a winner but captain Moukandjo wasted a great opportunity when he blazed Christian Bassogog’s pass over the crossbar from just inside the box.

However, Broos’ side snatched a late lead when Aboubakar brought down Siani’s long pass on his chest, looped the ball over Ali Gabr and fired a volley into the bottom-right corner.

Elneny was unable to force extra time when he sent a wild free-kick off target in the 93rd minute, easing Cameroon’s route to becoming the second most successful nation in the competition’s history, behind their beaten opponents.