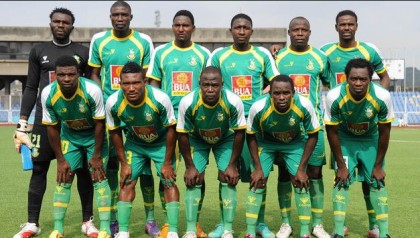 (NAN) Kano Pillars Football Club  and Sunshine Stars of Akure on Sunday‎ ‎capitalised on their home advantage and beat their visitors in their Match Day 10 fixture in the 2016/2017 Nigeria Professional Football League (NPFL) season.‎

Chinedu Udoji scored the lone goal in the 27th minute of the match.

Kano Pillars had several goal scoring chances in the first half, but could not extend their lead, while the visiting side’s defenders  were able to hold them down.‎‎

Kano Pillars’ coach Kadiri Ikhana later told newsmen he was happy with his team recording another win, after their draw with Rivers United in Port Harcourt.‎

He expressed satisfaction with the game’s outcome, and also lamented the team’s poor performance in the second half of the match.‎

“We are now looking ahead to recording victory in every match,” the coach said.

On his part, Katsina United FC’s coach, Baldwin Bazuaye, commended his team for their performance.

He said he would however re-strategise to ensure that his team won matches home and away.‎

In Akure, Sunshine Stars’ midfielder Ayo Saka  scored to give them the maximum three points..

In the match played at the Ondo State Sports Complex in Akure, Saka scored with a 25-yard shot in the 38th minute to give them a 1-0 victory over Rivers United.

Kayode Olujohungbe, Technical Adviser of Sunshine Stars, later told newsmen after the encounter he was happy with the way his team played.

Olujohungbe noted that his team played better against ABS FC of Ilorin, but was unlucky not to win the game.

He said the team would now take it one match at a time and would hope to improve on the unbeaten run of form in the league against El-Kanemi Warriors of Maiduguri.

The News Agency of Nigeria (NAN) reports that Sunshine Stars now have 12 points from 10 matches.