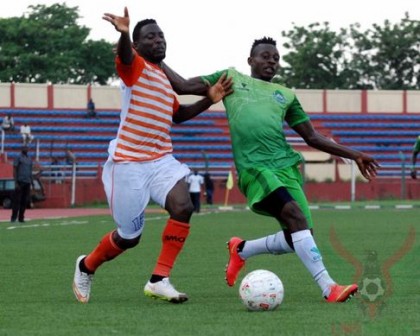 3SC scored through Sunday Faleye in the 25th minute of the Match Day 10 game at the Lekan Salami Stadium at Adamasingba.

They got the equaliser in the 52nd minute of the game through Ewelike Edozie.

3SC Coach Fatai Amoo said that the draw recorded could not be attributed to fatigue from the team’s consecutive visits to Katsina and Bauchi.

“That should be a peculiar problem. We cannot be over emphasising that. It is for us to see where we have not performed well and work on it.

Unfortunately, we have been doing a lot of goal scoring exercises and training. It is not something that could pick up overnight.

It is unfortunate that we have people who have lots of passion for the game and this is a team we have to develop.

Check these boys who are playing, apart from the back, all the boys from the midfield to the attack are from different teams and others too appreciate that,” he said.

Amoo said their focus now would be to see how they could win their next matches, saying any team could win irrespective of where it was playing.

Coach Fatai Osho of Remo Stars said his boys had played very well, adding that they lost the strength and domineering spirit in the game to the early goal conceded.

He described the performance as a turning point for the team, assuring that they would return home to build on it.

Osho, however, was optimistic that his team would pick the maximum three points from their next match, which is against Kano Pillars.