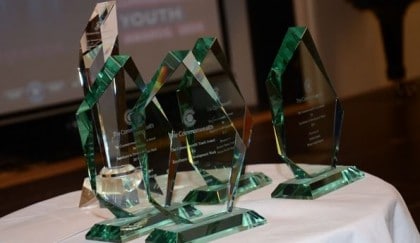 (VON)  The 11th edition of the Nigerian Navy Games ended at the weekend in Uyo, Akwa Ibom State with the Western Naval Command emerging the overall winner of the championship.

The competition Tagged, “Uyo 2017”, the navy personnel from the zone won a total of 184 medals, including 69 gold, 69 silver and 46 bronze to top the medal table which over 1,500 athletes and officials across the navy formations in the country participated.

The Eastern Naval Command emerged second position in the competition with 38 gold, 22 silver and 34 bronze medals while the third position went to Naval Headquarters with 108 medals.

Presenting the cup to the overall winner, the Chief of Naval Staff, Vice Admiral Ibok-ete Ibas commended the athletes for the spirit of sportsmanship exhibited throughout the games.

He urged the athletes to constantly remain fit even after the games to enable them perform their duties effectively.
The Chief of Naval Staff said that the immediate appraisal of the games has revealed that the objective of the Naval Games has been achieved as the policy of the navy is to use sports to build the mental and physical fitness of its personnel.

“They are important factors in the management of personnel in the navy and therefore have always attracted attention from the authorities,’’ he said.
According to him, the promotion of mass participation in sports by personnel on-board ships and ashore establishments helped to promote `esprit de corp’ that enhance healthy working environment.

The games, he said has also help to develop talents among the personnel and raise strong athletes which could represent the Navy and the Armed Forces in national and international sports competitions.
While commending dignitaries, the Akwa Ibom State Government and people of the state for their support and show of love throughout games, the Chief of Naval Staff enjoined participants not rest on their oars but to intensify effort towards achieving better goals.

He acknowledged state government for providing adequate facilities during the games and the hospitality accorded the navy and its contingent throughout the period the games lasted.

The Akwa Ibom State Governor, Mr Udom Emmanuel who was represented by his Deputy, Mr Moses Ekpo expressed lauded the Navy Command for choosing the state for the games saying “the state is noted all over the World for it sound and impeccable hospitality”.

The governor noted that 2017 edition of the games has, among other things, enliven the spirit of sport loving citizens exposed its athletes to competitors outside the state.