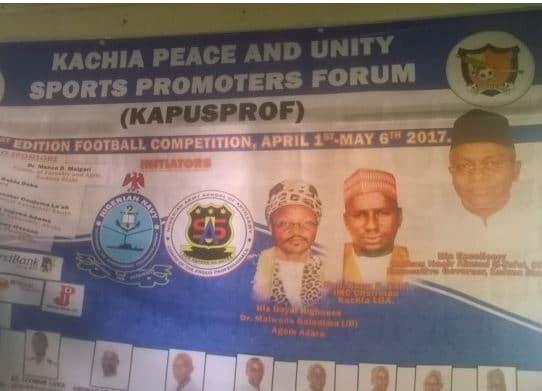 By Stella Kabruk (Kaduna) : No fewer than 20 teams are expected to participate in the maiden edition of Kachia Football Competition in Kaduna State, the organisers said on Tuesday.

Joshua Ayuba, Chairman, Kachia Peace and Unity Sports Promoters Forum told newsmen in Kaduna that the competition would run from April 1 to May 6 in Kachia.

He said the competition was initiated by the Nigeria Navy School of Armament Technology and Nigeria Army School of Artillery.

“This is the first organise football competition in the local government area.

“The idea was initiated by Rear Admiral Timothy Dakwak, to promote peace in the area.

Ayuba added that the competition would be played in two venues, adding that the teams had been grouped into four.

“We are playing our matches in two venues – Gumel football pitch and Kachia stadium.

“Registration is on for interested club at the rate of N5,000. We have secured clearance for players and match balls for the competition.”

The forum’s chairman added that the group would also promote other sports like wrestling, marathon and indoor games.

“Our intention is not just to run the competition for one year but to make it annually in the local government,” he said.

He added that prizes would be distributed to all the participating teams, players and coaches.