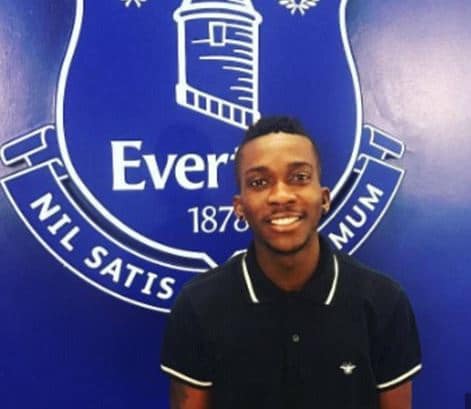 Henry Onyekuru Announces His Own Move to Everton

June 28, 2017 (Dailymail/NTA) Henry Onyekuru has taken it upon himself to make the announcement that he has signed with Everton ahead of the 2017-18 season.

The Nigerian striker was in demand this summer, with Arsenal and West Ham both heavily linked with a deal for the youngster.

Earlier in the week Sportsmail revealed Everton had fended off interest from the Gunners to bring the Nigerian to the Premier League, and now the player himself has officially acknowledged the move.

Taking to Instagram Onyekuru posted an image of himself standing in front of a large Everton club crest, believed to be at their Finch Farm training base where the player had a medical on Monday.

Captioning the shot, Onyekuru wrote: ‘So happy to sign for Everton #thankful #everton.’

The Toffees are yet to officially confirm on their club channels the news that Onyekuru will be playing at Goodison Park next season, though they are expected to do so later on Wednesday.

The Nigeria striker finished last season as the joint leading scorer in the Belgian Super League with 22 goals in 38 games – 10 of those came in the final 10 games – and attracted the attention of a number of top clubs across Europe as a result.

His form was so good that he won his first international caps at the end of the campaign for Nigeria.

Arsenal had been regarded as leading the chase for the 20-year-old but Everton trumped them all by negotiating a deal with the player’s club KAS Eupen that will see Onyekuru spend a season on loan with Anderlecht before coming to the Premier League.

Everton feel another season spent with Anderlecht, who will be playing in the Champions League, will be significant for Onyekuru’s development and he will arrive at Goodison Park in 12 months a much more polished forward.