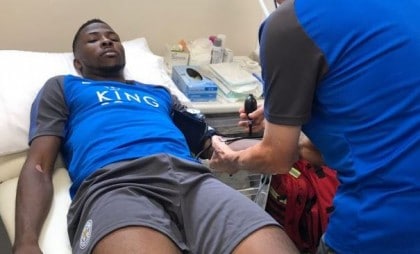 Iheanacho, 20, signed a five-year deal at the King Power Stadium with the transfer fee officially undisclosed.

However, reports say the fee is believed to be about 25 million pounds.

“It’s a great signing for us.

“Kelechi is an enormously talented player that has shown a huge amount of promise at every level in which he’s played,” Leicester manager, Craig Shakespeare was quoted as saying on the club’s website.

Iheanacho becomes the fourth new arrival at Leicester for the new season following the acquisitions of midfielder Vicente Iborra from Sevilla and goalkeeper Eldin Jakupovic and defender Harry Maguire from Hull City.

The player will wear the No 8 shirt and joins fellow Nigeria internationals, Wilfred Ndidi and Ahmed Musa, at the 2016 Premier League champions.

“It feels good and I’m happy to be part of this team.

“I know the ambition of the team and speaking with the manager, he let me know what I need to do – to help the team achieve what they want.

He had signed a new contract with City until 2021 at the beginning of last season, but saw his first-team opportunities at the Etihad Stadium curtailed by the arrival of Brazil forward, Gabriel Jesus, in January.

The academy product still made nine starts and 21 substitute appearances for Pep Guardiola’s team last term, scoring nine goals, but he has now decided on a fresh start.

In total, he scored 21 goals in 64 games in all competitions since making his debut for City in 2015, while he has scored six goals in 10 appearances for Nigeria.

Leicester play away to Arsenal in the opening game of the new Premier League season  August 11. (NAN)