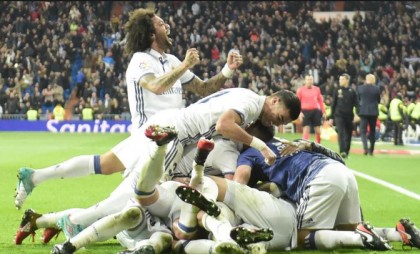 The Zidane Zidane-managed Madrid dominated most part of the game and deservedly got the opener through Carlos Casemiro in the 24th minute.

Dani Carvajal sent a little dink into the box as Casemiro timed his run fairly well to beat his marker and got the ball past goalkeeper De Gea with a well converted left footed shot.

Francisco Isco doubled the advantage in the 52nd minute after playing a lovely one-two with Gareth Bale near the edge of the box and continued his run to slot the ball into the bottom right corner past De Gea.

Goalkeeper Keylor Navas had parried a lethal left footed shot by Nemanja Matic which luckily fell on Lukaku’s path with the Belgian forward on hand to tap the ball home.