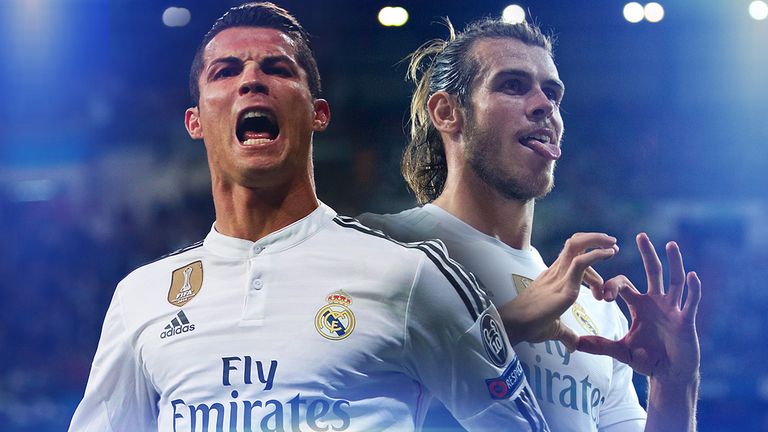 Cristiano Ronaldo inspired La Liga defending champions Real Madrid to a 2-1 victory at Getafe, putting them a touching distance away from league leaders Barcelona. The goal in the 85th minute was his first this season.

The victory on Saturday cut Barcelona’s lead to five points, on a day that Luis Suarez also struck late to snatch a 1-1 draw for Barcelona at Atletico Madrid.

Saul Niguez gave Atletico the lead in the 21st minute with a thumping low drive into the bottom corner, finally beating Marc-Andre ter Stegen after the German goalkeeper had twice thwarted Antoine Griezmann.

Barca were much improved after the break, however, and Suarez goaded the home fans behind the goal after deservedly pulling his side level in the 82nd minute, putting his finger to his lips and cupping his ears.

Earlier, Real Madrid were in danger of dropping points for the fourth time in eight games before Ronaldo rammed in a lofted pass from substitute Isco in the 85th minute to score his first league goal of the season and avoid a costly draw.

Barca top the standings with 22 points while Real climbed above Atletico into second on 17. Sevilla slid down from second to fourth after losing 1-0 at Athletic Bilbao, suffering an eighth consecutive away defeat to the Basques.

Lionel Messi had threatened to give Barca the lead less than 30 seconds into the game at the Wanda Metropolitano stadium, which was packed with Spain flags as tensions from Catalonia’s banned referendum on independence continued to be felt.

The Argentine ripped through Atletico’s defence only to see his shot squirm wide but the home side managed the first half better, soaking up Barca’s pressure and carefully plotting their counter-attacks.

The visitors, however, were much improved after the break.

Messi clanged the crossbar from a free kick and inexplicably missed the target from close range, while Suarez was denied by Atletico goalkeeper Jan Oblak before leveling and came close to snatching a winner in injury time but narrowly failed to make contact with a cross which fizzed past the far post.

“After spending almost all the game behind this isn’t a bad point for us, especially against one of our rivals for the league title,” Suarez told reporters.

“Everyone knows Atletico defend very well and have a great goalkeeper who proves himself in every game. We deserved more from the second half and could have taken all the points.”

With one eye on Tuesday’s Champions League game against Tottenham Hotspur, Zidane rested his usual midfield pairing of Casemiro and Luka Modric and started without Isco.

Madrid failed to sparkle but went ahead in the 39th minute through an arrowed finish from Karim Benzema, who was starting alongside Ronaldo for the first time since the Champions League final.

They slowed further down in the second half and their lead vanished in the 56th minute with what was Getafe’s first real chance as Jorge Molina bundled the ball towards goal, although Real midfielder Marcos Llorente got the final touch.

Replays showed the equalizer should also have been disallowed for offside and Real were further aggrieved when substitute Theo Hernandez had a goal ruled out for offside.

Ronaldo, however, averted another setback in what has been an underwhelming league campaign and saved the blushes of coach Zinedine Zidane in the Frenchman’s 100th game in charge.

“We started very well and then we relaxed after the break but in the end thanks to our character and the substitutions we fixed it,” Zidane told reporters.

“We know that over 90 minutes we can score at any moment and in the second half we struggled but we knew we would be able to get back into the lead and that’s what we did.”