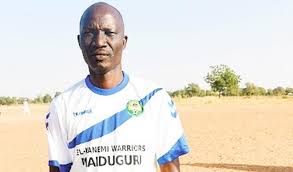 (VON)  Coach of El-Kanemi Warriors of Maiduguri, Ladan Bosso has assured that his team would not end the 2016/2017 Nigeria Professional Football League (NPFL) season without an honour.

He gave the assurance on Sunday in Maiduguri at the post-match press conference after his team defeated visiting Nasarawa United of Lafia 2-0 in a Match Day 10 fixture.

“I am happy with the match. I think we are getting close to picking a continental ticket at the end of the season.”

The home team scored the goals within four minutes of the second half of the match played at the El-Kanemi Warriors Sports Centre in Maiduguri.

Bello Kafar-Mata scored in the 63rd minute of play while Mathias Simon increased the tally in the 66th minute.

Nassarawa United’s coach Kabiru Dogo also told sportswriters at the end of the encounter that the fixture was a good match for his side in spite of the loss.

“I think it was a well-played match. I congratulate El-Kanemi Warriors for their victory,” Dogo said.