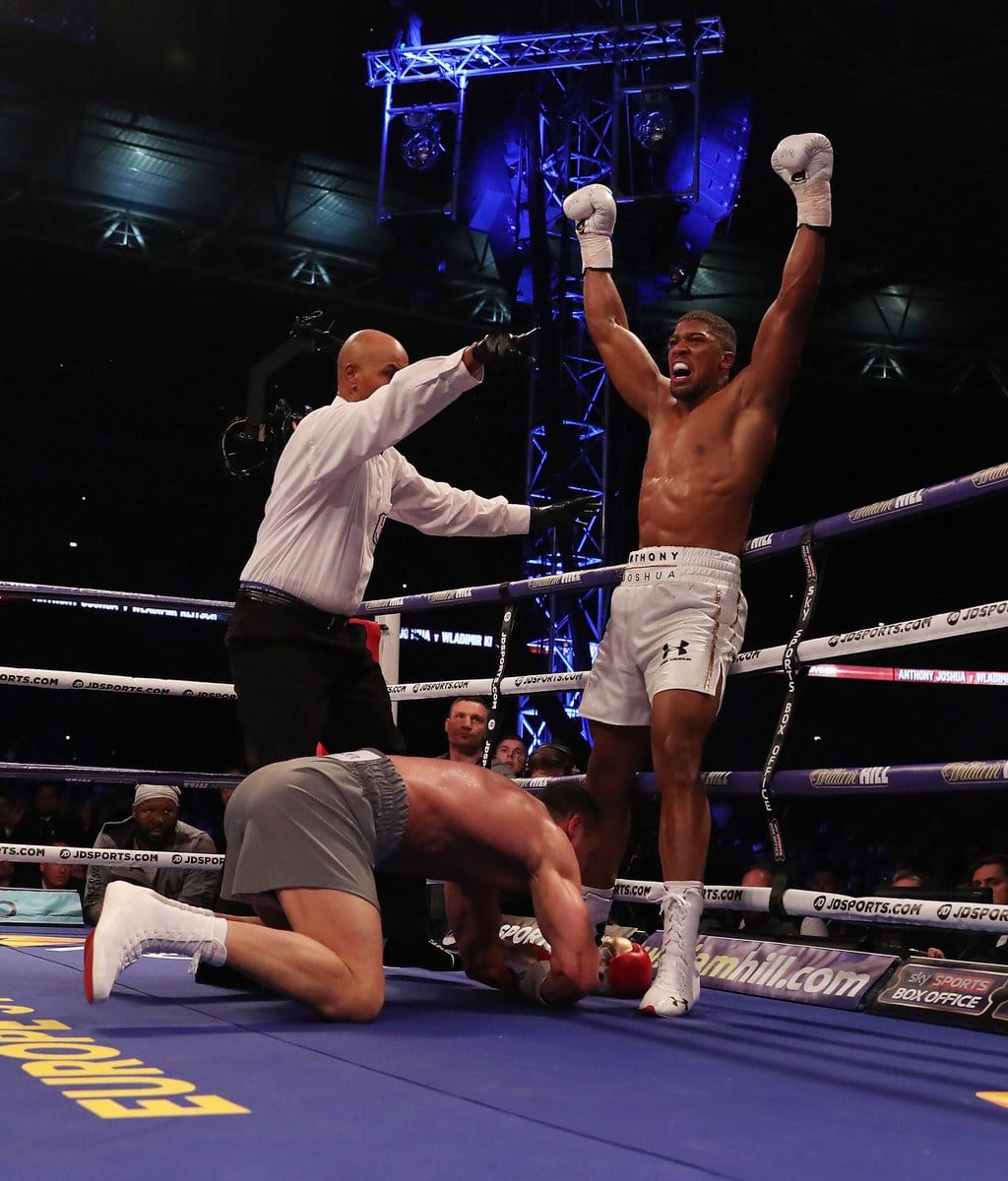 I’m not perfect but I’m trying,” says Anthony Joshua, who follows with a series of gracious words for the fallen Klitschko. What a night!

The 27-year-old has retained the IBF’s version of the heavyweight title while adding the vacant WBA strap. He’s now 19-0 with all 19 victories by stoppage.

Joshua looks to blitz Klitschko from the opening bell of the 11th and Klitschko is down! An uppercut! Klitschko is hurt! Joshua looks to finish the job and sends Klitschko crashing to the canvas again. Klitschko down a second time in the 11th! Klitschko beats the count but Joshua comes in for the finish, Klitschko buckling under a flurry of punches and the referee intervenes! It’s over! That sums of the fight between the duo. 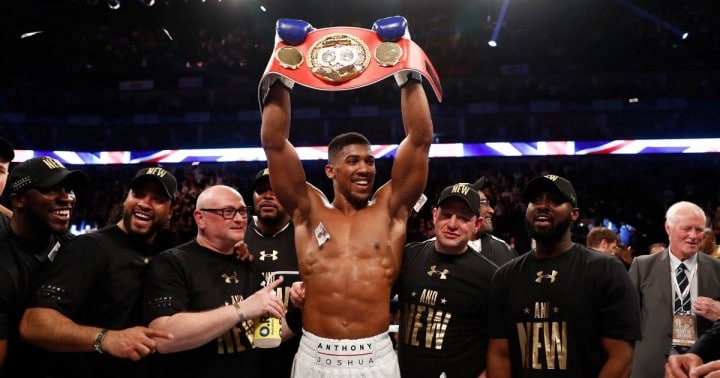 Before Anthony Joshua and Wladimir Klitschko face off in front of a record-breaking 90,000 fans at Wembley Saturday night, there was more than the difference of 50 fights and 314 rounds between them.

Now 41, with many claiming his best years are behind him, Klitschko has a wealth of experience on his side to combat Joshua’s young legs and explosive power.

Ukrainian Klitschko has, at one time or another throughout a glittering 21-year career, held the WBA, IBF, WBO and IBO heavyweight titles.

Up until his shock defeat to Tyson Fury 18 months ago, the Ukrainian was undefeated for over a decade — a run dubbed the “Klitschko era” due to his and older brother Vitali’s dominance of the heavyweight division.

The 27-year-old Joshua, on the other hand, has not only endured just a quarter of the professional fights Klitschko has, he’s barely even had to absorb a punch.

Dillian Whyte’s powerful left hook, which made Joshua’s legs wobble all over the ring during their British heavyweight title bout in 2015, is the only real test of his otherwise untried chin.

The age gap between the fighters is such that Klitschko has been boxing for the same amount of time Joshua has been alive.

The 27-year-old Briton goes into the fight defending his IBF title, while also trying to win the WBA and IBO titles vacated by Fury after he tested positive for cocaine.

“I don’t hate Klitschko, I don’t dislike him, but I want to beat him,” Joshua told hoards of adoring fans after tipping the scales at 250.1 lbs on Friday’s weigh in.

It’s the heaviest Joshua has been during his short but, so far, straightforward career.

“I’ve never seen Anthony this big. He looks like Arnold Schwarzenegger in his bodybuilding prime,” Klitschko marvelled during the open workouts earlier this week.

The Ukrainian, meanwhile, weighed in at 240.6 lbs — half a stone lighter than his usual fighting weight.

“You never know how the fight will go,” Joshua responded when asked if this bout is his hardest test to date.

“This could be an easy fight, or I could go out there and something could happen and then maybe a fight that wasn’t supposed to be so hard could become harder. 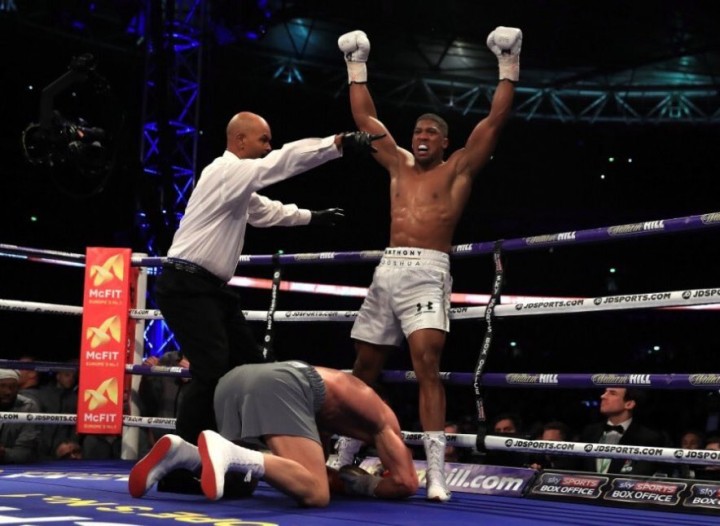 “All I have to do is make this fight as easy as possible and win in good fashion.”

Known for his analytical approach and strategic fighting, Klitschko finds himself in the unusual position of being a challenger once again.

“Is it a degradation that I’m a challenger and an underdog in this fight? I don’t think so. I think it’s a great opportunity,” he insisted.

“I feel young, hungry, humble and totally obsessed with my goal to raise my hands again as the winner of this fight.”

At Thursday’s pre-fight press conference, the biggest talking point came when Klitschko pulled a USB stick out of his pocket. 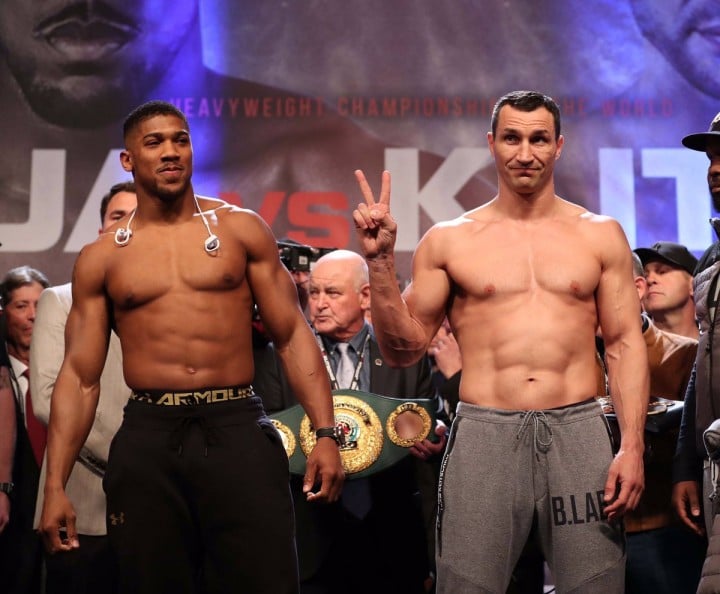 He claimed, with unnerving confidence, that he had recorded his prediction for the outcome of the fight.

The only person who will be able to watch the video, he said, is the highest bidder, with all proceeds going to the Klitschko Foundation, drawing warm applause from the crowd.

“It’s strategy, isn’t it?” Joshua said. “I’m just focusing on the fight. I’m not downloading any USB, bringing that to press conferences.

“I didn’t really take it the way he was hoping. It was an attempt at mind games.”

Klitschko’s trainer, Johnathon Banks, has said that defeat would render his career meaningless, while Joshua previously claimed victory would make him an “overnight legend.”

Whatever happens, Saturday night will live long in the memory.

Before this fight, profile of each player thus – 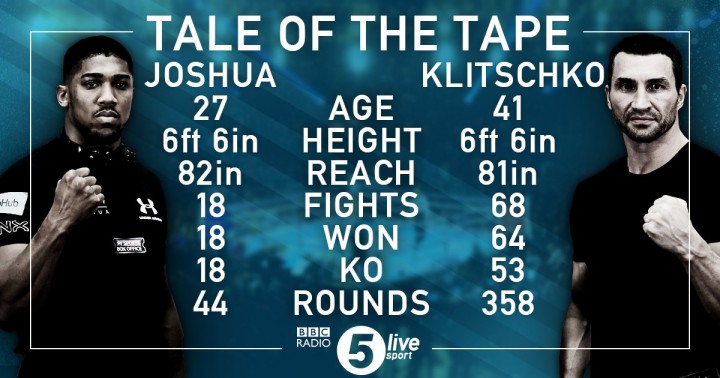 Anthony Oluwafemi Joshua is a 27-year-old heavyweight boxer who goes by the nickname “AJ”. He is currently undefeated as a professional boxer, now with 19 wins and an incredible 19 knockouts. In truth he has not looked close to losing any fight he has had.

Joshua was born in Watford on October 15, 1989, to Yoruba parents from Southwest Nigeria and by his own admission, had a tough upbringing.

His cousin is fellow unbeaten professional boxer Ben lleyemi. The pair made their professional debuts together in 2013.

Joshua grew up for some of his early years in Nigeria and returned to the UK halfway through year seven. Growing up on the Meriden Estate in Garston, Hertfordshire, Joshua was called ‘Femi’ by his friends and former teachers, due to his middle name ‘Oluwafemi’. He excelled at football and athletics and broke the nine-year-old 100m record with a time of 11.6 seconds.