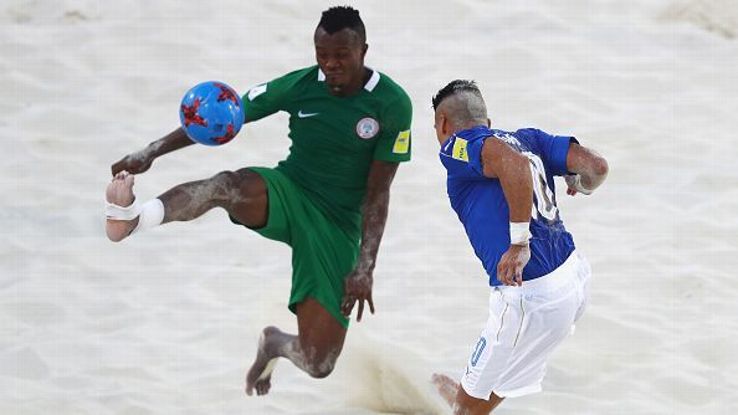 Nigeria staged a remarkable comeback to defeat Mexico 5-4 in extra time of their Group B clash on Saturday at the 2017 FIFA Beach Soccer World Cup in Nassau, Bahamas.

It was the Mexicans that initially took control of the contest at the National Beach Soccer Arena after goals from Abdiel Villa, Angel Rodriguez and Ramon Maldonado.

However, the West Africans responded with a pair of goals from Emeka Ogbonna and Azeez Abu.

After this, a late Victor Tale penalty kick resulted in the first regulation-time draw at Bahamas 2017.

Nigeria outlasted Mexico in the extra-time period, with Abu scoring the winner just seconds from the end to claim the two points on offer.

The News Agency of Nigeria (NAN) reports that the win meant the Super Sand Eagles have revived hopes of a quarter-final qualification.

After a 6-12 loss to Italy in their opening game, the Nigerian side needed a win to come back into the competition.

They now need to win against Iran in their final Group B game on Monday.