As competition continue at the 19th Nigeria Polytechnic Games Association (NIPOGA) Games in Nasarawa, the organisers and athletes alike have praised the standard and quality of facilities for the Games.

The News Agency of Nigeria (NAN) reports that no fewer than 4,000 athletes from over 81 Nigerian polytechnics are taking part in about 12 sporting events at the Federal Polytechnic, Nasarawa. 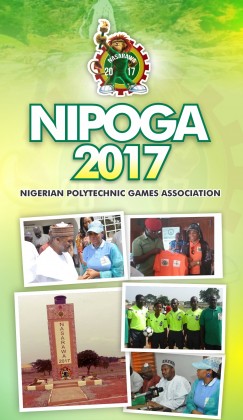 The Chairman, Local Organising Committee (LOC) for the Games, told NAN the games had already surpassed his expectation and those of so many people alike.

He also hailed what he called a “ground-breaking’’ Opening Ceremony.

“The opening ceremony in particular was indeed a spectacle and I bet Nasarawa 2017 will surely remain in the minds of many for a long time to come.

“We wanted to show NIPOGA from a different perspective.

“Most people did not expect such a sophisticated show from us and I do not want to boast or praise us, but it was a really ground-breaking opening ceremony,’’ he said.

He, however, noted that the Games experienced a little hitch two days before the opening ceremony ranging from an epileptic power supply to inadequate water supply.

“Athletes who arrived some few days earlier before the Games had a little challenge of light and low water supply.

“But we thank God, we were able to overcome all these challenges before the opening ceremony proper and I can confidently tell you that it has been smooth from Day One till now,’’ he said.

Coach Benjamin Daniel, the Volleyball Referees’ Coordinator, said the standard of organisation of the Games was higher compared to that of the just-concluded Nigeria University Games Association (NUGA) Games in Makurdi.

“The games have been so wonderfully organised so far and it’s like NIPOGA now has an edge over NUGA in terms of the organisation and facilities for Games.

“Indeed, this is the first of its kind in the history of NIPOGA as it had never involved national graded referees before.

“Before now, any institution chosen as host for the Games usually wants to win at all cost.

So, what they do is to invite unqualified and non-graded referees to officiate and favour the host teams.

“But now I can see that things have changed and I must give kudos to the organisers as they have ensured that there is a neutral and unbiased officiating by inviting graded and international referees for every event.

“So, because of the quality of referees in the Games, there has been fair officiating and both the coaches and players of the various teams are pleased with what they have seen so far,’’ he said.

He, however, noted that there had been pockets of protest about the use of mercenaries in the volleyball event.

He added that the Disciplinary Committee was looking into it and those found wanting would be disqualified.

Sani Ibrahim, the Badminton Coordinator, noted that all the facilities being used for the Games conformed to international standard.

He said that it had gone a long way in guaranteeing the validity and accuracy of performances and protecting the safety of athletes.

“Standard facilities and equipment are essential pre-requisite for the hosting of any successful Games and I must give kudos to the organisers for ensuring that the facilities here met international standards.

“The dearth of sports facilities and equipment in our institutions cannot be overlooked and so it is my sincere hope and prayer that adequate provision is put in place for the maintenance of these facilities that are expensive,’’ he said.

Also, Winner Peter, an athlete and National Diploma (ND) One student of Plateau State Polytechnic, Barkin Ladi, said she was impressed with what she had seen and experienced so far at the Games.

“This particular edition is something special to me as this is my very first time participating in the Games.

“It means a lot and it’s been a wonderful experience so far,’’ she said.

Bashir Umar of the Federal Polytechnic, Bida, gave full marks to the organizers, saying: “The experience is like 110 over 100 percent.

“I give kudos to the organisers for the innovations and wonderful facilities here.

“It really has been incredible, great, overwhelming, exciting, and I am very satisfied with what I have seen so far,’’ he said.

NAN also reports that the Games which began on April 29 is expected to end with a closing ceremony on Saturday. (NAN)