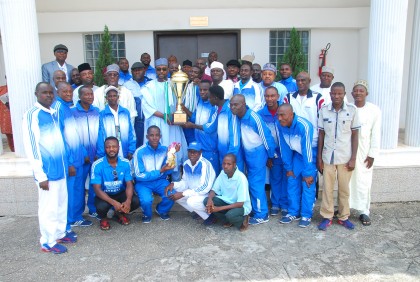 Niger State Governor, Alhaji Abubakar Sani Bello has said that the state government has awarded the contract and would soon commence the construction of an ultramodern Astro turf pitch for the  State Hockey Team , Niger Flickers, and a sports complex other sports.

Governor Sani Bello, who also announced the donation of a Bus to the state Hockey team, directed the Ministries of Sports Development and Education to, immediately, revive schools sport as an avenue for discovering hidden talents;  adding that the time was rife for the state to regain its lost glory and re-establish itself as one of the major force to be reckoned within   of sports in the country.

Receiving players and officials of the victorious Niger Flickers Hockey team that recently won the National Hockey Super League competition, at Government House, Minna, Governor Sani Bello disclosed that a template or road map would soon be designed to ensure that no successive governments pay leap service to sports development in the state.

An elated Governor Sani Bello noted that, apart from being a tool for national unity and human development, the sports sector has remained one of the largest employer of labour and revenue earner with the capacity to provide economic prosperity to athletes.

“This is the reason why the state government is prepared to do everything possible to support and promote sports development and encourage the youths to participate in various sport of their choice”.

Presenting the trophy  won by the hockey team, the commissioner for sports development, Alhaji Mamman Musa appreciated the team’s effort and thanked Governor Sani Bello for supporting the team to victory.

The Commissioner used the opportunity to make case for other sports and pleaded with the state government to provide a functional playing/training pitch for them.

This victory earned Niger Flickers another opportunity to represent the state and county at the continental championship slated for Egypt later in the year.