With the crowing of Plateau United as the 2016/2017 Nigeria Professional Football League (NPFL) champions on the last day of the competition, Lagos-Based MFM FC Coach, Fidelis Illechukwu, says the Jos-based team players are worthy champions. 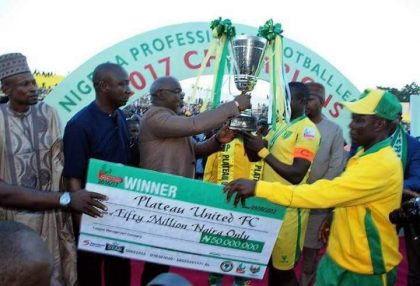 The News Agency of Nigeria (NAN) reports that that a last gap win for the Kennedy Boboye-tutored side against Rangers International of Enugu at the Rwang Pam Stadium gave them the much sort after NPFL trophy.

The Peace Boys from Jos, first time winners of the NPFL, were able to beat the incumbent champions Enugu Rangers 2-0 on Saturday with goals from Emeka Umeh and Benjamin Turba.

The Jos team needed the win so as to keep off the trailing MFM who are leading by only one point and any slip would have gifted the Olukoya Boys the trophy.

However, MFM on the other hand were handed a 1-2 defeat by Laddan Bosso-tutored El Kanemi Warriors of Maiduguri in the Match Day 38 encounter.

MFM gaffer Illechukwu, in an interview with the NAN said that the Kennedy Boys were worthy champions of the league.

“They are worthy champions and we congratulate them for their feat, they worked for the crown and it is theirs.

“We also have the same ambition but it was for now, maybe next time we will try,” he said.

Also, MFM Spokesman, Olawale Quadri, described the 2016/2017 season as great, adding that the team had accomplished its target.

“For us it is a great season because nobody gave us the chance and at the end of the day we are able to secure a continental ticket.

“We are excited getting the ticket and we promise Lagos fans a lot of surprises. For the continental ticket, we will ensure that we do well to please our fans.

“Ultimately, recruitment of new players will be the major task ahead of the team management for now,” he said.

NAN reports that Plateau United wrapped up the last day match with a win which earned them the NPFL trophy with 66 points, while MFM came second are with 62 points. (NAN)