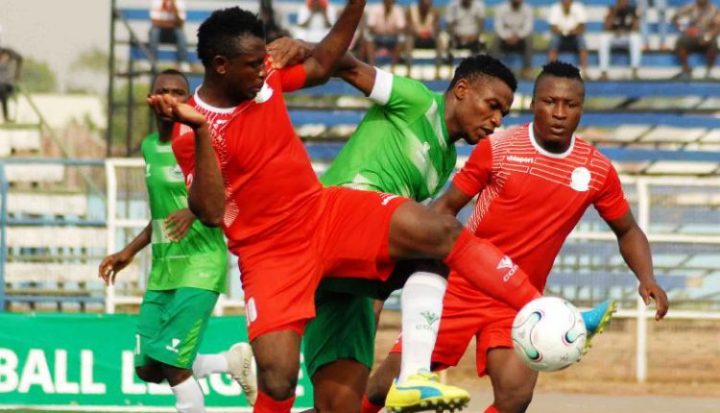 Nasarawa United eased relegation worries with a 2-1 victory over Katsina United at the Lafia City Stadium on Wednesday. A brace by Najeem Olukokun ensured Abdulbasit Shittu’s own goal did not prove costly.

Before the game, the Solid Miners were just a place above the drop zone only ahead of 17th placed Heartland on goals difference hence the importance of the maximum points.

He who needs it most has it most of the time and Nasarawa left no one in doubt as regards their resolve. They swooped on the visitors and before the end of the first half, had got it all wrapped up.

The earlier minutes were scrappy and the first real attempt on goal was in the seventh minute when Katsina’s Destiny Ashadi latched unto a loose ball, let fly from 25 yards only to miss target by inches.

But Nasarawa pressed forward right away. Three minutes later, a moment of brilliance saw Williams Nwani dance away past Faisal Sani and delivered a sumptuous cross which was obligingly nodded in by Olukokun.

The Changi Boys fought back and in the 17th minute, Nasarawa keeper Suraj Ayeleso reacted quickly to parry Tasiu Lawal’s chip into corner.

Then in the 24th minute, defender Shittu guided the ball beyond his keeper Ayeleso for the visitors’ equaliser.

Whoever thought this would be the impetus Katsina needed to get a remarkable away result was mistaking. They took their feet off the pedal and the hosts swooped on them.

It was Nasarawa all the way. In the 34th minute, Kabir Balogun teed on Olukokun whose curler from the edge of the box missed target narrowly.

In the 38th minute, Abubakar Abdullahi’s poor first touch when he was clear at goal helped Sani to close him down. That was a let off. The hosts were really knocking on the door.

The goal came soon. In the 42nd minute, marauding right-back Abdullahi’s quick feet set him through. He put the ball on a plate for Olukokun who grabbed his second of the day and his fifth for the season.

Kabiru Dogo’s wards didn’t cease the blitz. Two minutes later, the lively Nwani turned away and dropped the ball into the box. Any contact would do, but Balogun’s effort was blocked by Chinedu Ajanah.

The job had been done in the first half. The next half was drab. Nasarawa played to run down the clock while Katsina posed little or no threat.

Katsina coach Abdullahi Biffo lampooned his boys for showing “too much respect” to the hosts.

“They (Nasarawa) did the job in the first 40 minutes. My boys showed them too much respect. I know it won’t be easy. The boys have to step up on their away performances,” he said.

Dogo believes things are adding up for his team.

“We didn’t have a good pre-season. It has affected us. The boys are picking gradually. We will be better in the second stanza,” he opined.