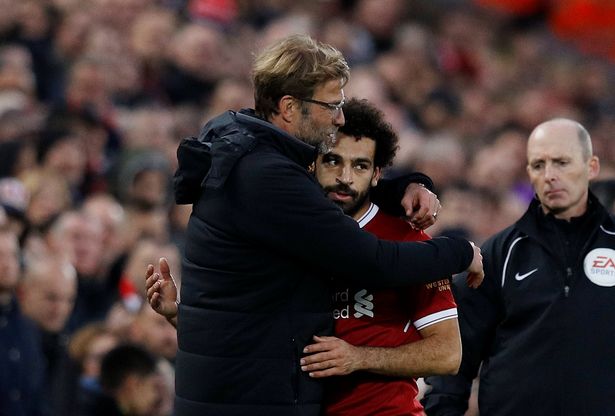 Liverpool’s Mohamed Salah was set a target of reaching 35 goals and assists combined in his first season with the Reds in order to trigger a £2.5m bonus in his contract, according to the information in a new book from Football Leaks.

Salah achieved that seemingly ambitious landmark with plenty to spare as he has scored 43 goals for Liverpool in his maiden season with the club, with his bonus added to a salary of £123,030-a-week ensuring he has enjoyed a bumper season under Jurgen Klopp’s watch.

The Egyptian forward claimed the PFA and Football Writers’ Player of the Year awards as he led Liverpool to the Champions League final against Real Madrid in Kiev on May 26th, with his financial windfalls putting some clarity on his current agreement with the Reds. 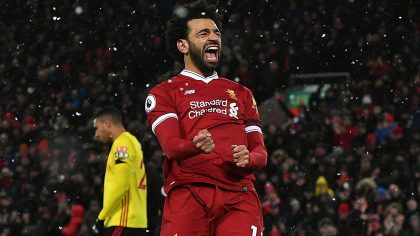 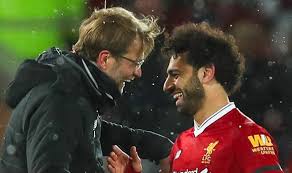 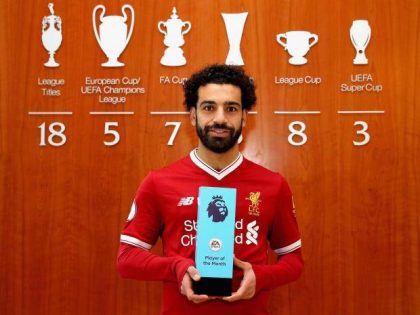 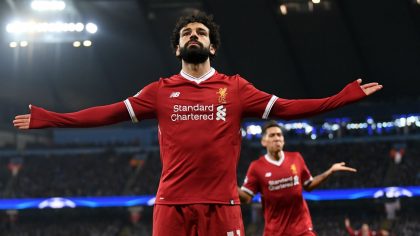 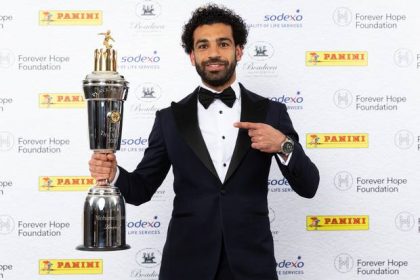 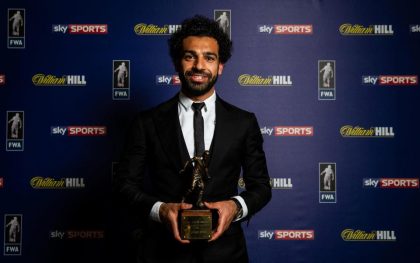 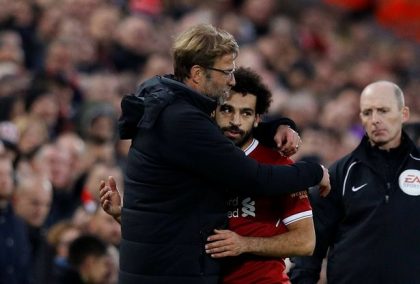 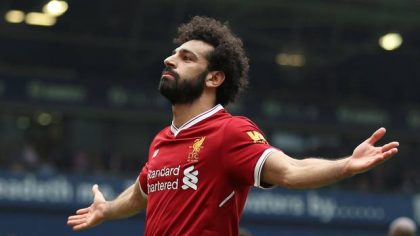 Liverpool manager Jurgen Klopp couldn’t be on hand to see his multiple-award-winning talisman Mohamed Salah pick up his Football Writers’ Association award after having already been named the player of the season and players’ player of the year at Anfield earlier on Thursday. But the German boss did pen a heartfelt note to the record-setting striker, who flew to London from Liverpool to pick up the FWA award in person, having also won the Professional Footballers Association prize for best player in 2017-18.

Before anything else, I would like to say on behalf of everyone at Liverpool Football Club how pleased we are to hear that Sir Alex Ferguson is already making a speedy recovery after his recent illness. You don’t have to be from this country or Scotland to appreciate his genius or importance to football — but the extent of the coverage in your publications following the news last weekend proves his status transcends his own profession. It’s fantastic news to hear he is already making big strides to a full recovery, and at LFC we are delighted about this.

Please accept my apologies for not being with you in person tonight. It is the club’s own award ceremony at Anfield, and as such, I need to prioritise being here with the rest of the team. Given this is the Football WRITERS’ Association, I thought a written acknowledgement from me — that someone could read out on the evening — would make more sense than a recorded message.

In terms of a Liverpool presence at your event tonight, hopefully, we have managed to show the respect it deserves — despite the clash with our own annual awards.

Your winner — Mr Salah — is either with you now or on his way, depending on when this message is read out. It is typical of Mo’s character that he was so keen to attend. And I don’t mean being greedy for awards — but being gracious and good-mannered to make every effort to be there in person and thank you for the honour.

There’s not much I can say about what he does “on the pitch” that you guys haven’t already seen and written about. The fact that you have voted for him as your “player of the season” reflects that you have witnessed his incredible quality as a footballer. But it’s his qualities as a person that should not be overlooked. 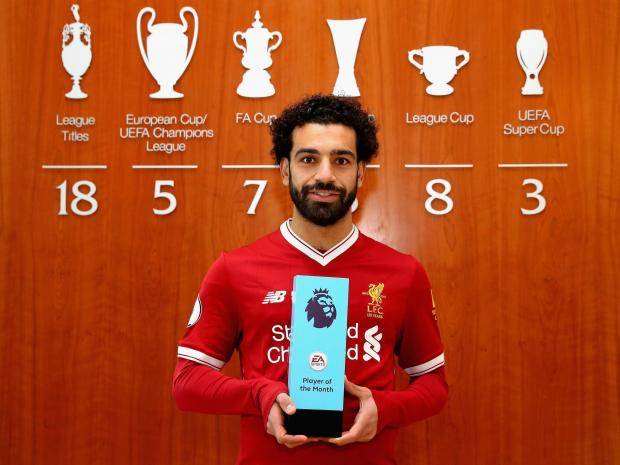 I read and hear about him being a wonderful role model for Egypt — North Africa — for the wider Arabic world and for Muslims. This, of course, is true, but he is a role model FULL STOP, regardless of race or religion, country or region of birth. The only “labels” we should put on Mo is what a good person he is and what a fantastic footballer he is. And by the way, the first part of that is more important in life than the second.

Mo is someone who sets an example of how to approach life and how to treat others. Around Melwood — with his teammates and the club staff — he is gentle and humble, despite being the international superstar he is now. The attention and acclaim have not changed him even by 0.01 percent. He arrived at Liverpool humble and warm, and this is the same boy who comes to be with you all tonight to accept your generous recognition, although maybe a little more tired and weary of selfies and autographs — so keep that in mind, please.

Mo, we are very proud of you and thankful for what you have done for this team and club — and, of course, we look forward to sharing many more seasons with you at Liverpool. In a season when Manchester City have been outstandingly good and played outstandingly well — football from another planet — you have won the two major awards. The one voted for by your fellow professionals and now the one voted for by the football writers.

You are world class, Mo — truly world class. And what’s even more exciting, for you, for Liverpool and for the public who get to watch you play: You can and will get even better.

Aside from Mo, I have another member of my team with you all this evening, and his presence is, I believe, recognition of the importance of your industry: writing and journalism.

Rhian Brewster is just 18 years old. During the past 12 months, Rhian has established himself as one of the most exciting prospects in English football. He has grown and risen in status at Liverpool. He won the World Cup for your country at his age level. He won the golden boot at that very same tournament. He made his family, his friends, his club and his country proud in doing what he did on the football pitch. 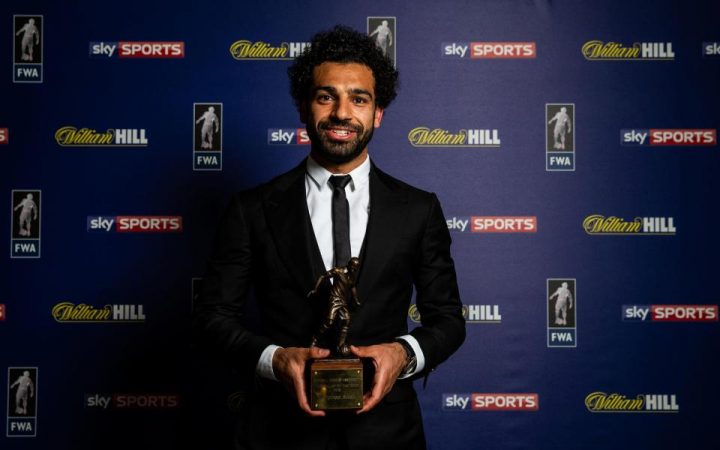 But it was away from the football pitch — and instead in the pages of a UK newspaper — where Rhian made an even bigger impact on the game we all love, and even a significant impact on society.

Aged just 17 at the time, and at his own behest, albeit with the support of his family and friends — plus the support of the incredible academy staff at Liverpool — he sat and spoke about racism in modern football with the same power, command and composure that he shows when playing.

The newspaper who carried the original story was then supported by other journalists and other publications — many of whom I am sure are in the room tonight — in making sure Rhian’s voice was loud and clear in articulating that racism and discrimination still exists and persists in our game.

That it takes a 17-year-old boy to do this is as frustrating and depressing as it is inspirational and uplifting. That many of you in the room were so supportive in spreading his message is a testimony to journalism in this country.

It is fitting that alongside Rhian — as part of the LFC table tonight — is Troy Townsend and other colleagues from Kick It Out. Troy and Kick It Out supported Rhian, Liverpool and other players during the very difficult periods following the occasions of racist abuse. They do so for players, staff, supporters up and down the country.

Troy and the team at Kick It Out help to educate players and staff at Liverpool — be it first team, academy or Ladies — on the importance of recognising we all still have lessons to learn in football — and in life — to ensure we are inclusive and not discriminatory.

As Rhian articulated so well in his interview, in England we are fortunate that big strides have been made whereby his own experiences have been largely restricted to European and International competitions. But sadly racism and discrimination is not exclusive to football overseas, and therefore Troy and Kick It Out are still as important as ever to the game in this country. 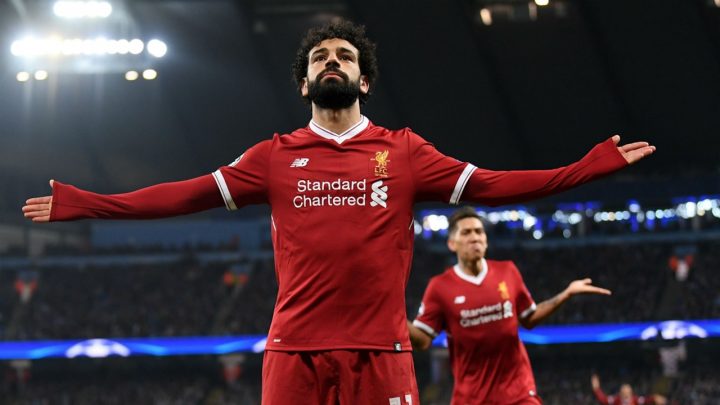 I would like to finish with two points, and I hope they do not in any way sound “preachy.” If they do, blame the person reading it — it is their fault clearly.

The first is to thank the English media for the coverage it continues to give football in this country. I am probably guilty — like many on my side of it — of bemoaning “The Press” at times, lumping everyone in together. But I know the game enjoys the prominence and profile in England because the media devotes so much time and energy to covering it.

In some respects, those of you in this room share the same journey as the players you cover. You have to show dedication and sacrifice. You have to constantly keep learning your job and adapt to changes. You make mistakes and learn from them. You are under huge pressure to deliver. And maybe it is good old English irony that in the age of social media, many of you are now subjected to the same scrutiny and comment on your performance.

And that brings me to my second and final point. It’s a World Cup year, and many in this room will no doubt be writing and broadcasting on the players performing for their country.

Clearly, as a German, I will be supporting my own country — and I have actually lost count of the number of countries I have claimed to be backing as my second team In Russia. I suppose that depends on the nationality of the reporter asking. I think, to date, I have said, “If not Germany then…” and declared for Egypt, Senegal, Croatia, Serbia, Brazil and even Iceland.

If Mo Salah is in the room, then Mo, ignore this next bit. Because if it’s not Germany, then it must be Egypt, of course. But England is a team I now have a great interest in, and I really wish Gareth Southgate, his staff and the team the best of luck.

Gareth is still a relatively young manager, and both for him as a coach and many of his players, I think this will be a first World Cup at senior level. I think as the English media you can help them if you are minded to do so. And that doesn’t mean to be “cheerleaders” or “ignore” failure and mistakes.

It just means remembering they are a group of relatively young people who will be giving their best and trying their hardest to make a nation proud and happy.

You are blessed in this country with wonderfully talented, skilful, honest, committed and tactically astute players. You are blessed with a coach who is brave and innovative.

England has the tools — because the manager and the players have the mentality, attitude, character… it is all there for you.

Maybe reduce the pressure a notch or two — that is where you can help, I think. Maybe take the numbers 1966 off your computer keyboards for the summer and let this team write their own history and memories.

Regardless, I hope those of you travelling to Russia have a tournament to enjoy and remember for the right reasons. Enjoy your evening, and thank you for making the right decision when voting, and for once, I don’t mean Brexit.

HAVE A GREAT NIGHT, AND WELL DONE, MO.