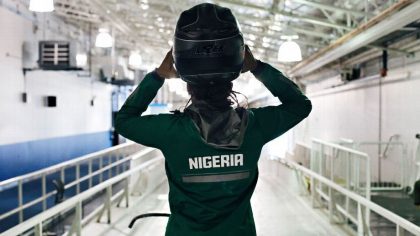 Making History: PyeongChang 2018 Winter Olympics For Nigerians Like No Other

Nigeria will be the first African country to compete in the bobsled event, an Olympics and African record. Bobsleigh or bobsled is a winter sport in which teams make timed runs down narrow, twisting, banked, iced tracks in a gravity-powered sled – it requires a lot of precision. The average speed of an Olympic bobsled is usually from 0 to 150km per hour, not an easy feat considering also the risk of crashing at 150kmh.

“It’s very similar to being thrown down a hill in a trash can — you just don’t really know where you’ll end up sometimes.”

No African nation has ever competed in an Olympic bobsled event and for this trio of trail-blazing Nigerian women getting to the Winter games is where their journey begins, not ends.

“The first time I got on a sled it was honestly terrifying, The only thing that saved my peace of mind was that I used to be a gamer, so initially I just treated it like a video game,” added the bubbly 31-year-old, who represented Nigeria as a hurdler at the 2012 London Olympics. 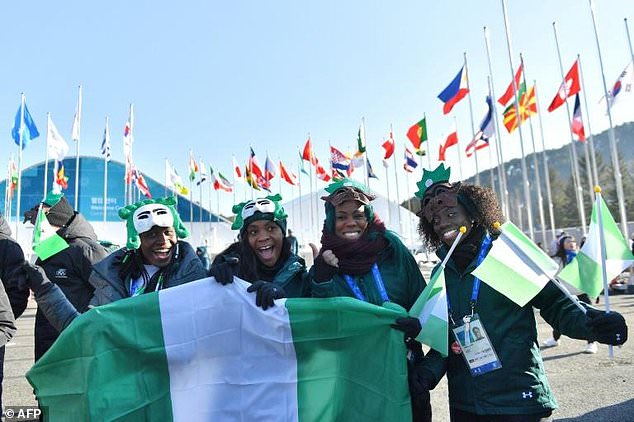 “That kind of help dampen the fear because when you get on a sled you really don’t know exactly what’s going to happen. We also pray! If there’s a ritual that we do that’s what it is.” Seun Adigun told reporters.


As they prepare to make Olympic history in Pyeongchang 2018, Nigeria’s women’s bobsleigh team admit they battle their demons every time they climb into the sled.

Being billed as “Cool Runnings” reloaded in Nigeria’s first Winter Games appearance, Seun Adigun and Akuoma Omeoga knelt in silent prayer Wednesday before hurtling down the track at breakneck speeds they know could kill them. 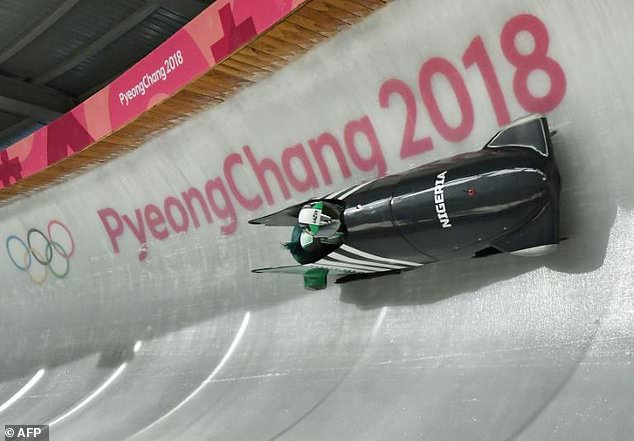 But it still takes nerves of steel to launch yourself down an icy mountain in an oversized tin can at 150kph (93mph).

“Of course you have to think about the dangers,” said the Texas-based Seun, who invited fellow runners Akuoma and Ngozi Onwumere to compete in the two-man bobsleigh in September 2016.

“You have to accept it and embrace it before you can actually apply what you need to protect yourself.

“It’s a ripping run of speed and being jolted around and sucked down into the bottom of the sled, whether it’s head first or bum first — you roll with the punches,” she chuckled.

But it still takes nerves of steel to launch yourself down an icy mountain in an oversized tin can at 150kph (93mph).

“It’s very similar to being thrown down a hill in a trash can — you just don’t really know where you’ll end up sometimes.”

The daredevil ladies, who will fly Nigeria’s flag with Simidele Adeagbo in the women’s skeleton, all grew up in the United States with a strong sense of pride in their African roots.

Their steep learning curve began by learning push starts at home in Houston in a wooden sled cobbled together by Seun using scrap materials from a hardware store.

The Nigerians booked their Olympic spot last November after Seun broke three helmets in qualifying, but with their long-awaited debut just days away Seun revealed they have yet to attempt a start at full pelt.

“We honestly have never actually sprinted behind the sled yet,” she said with a grin.

“Crazily enough I actually met the driver of the of the first Jamaican bobsled team (Dudley Stokes) today. I thought ‘Oh my gosh, we’re being compared to you!’ So it’s definitely been very cool.”

“We actually have just done maybe 70 percent hits because everything we have being doing to this point has been survival!”

The Nigerian women take no issue with inevitable comparisons to the trail-blazing Jamaicans.

“We feel honoured, to say the least,” said Akuoma.

“Crazily enough I actually met the driver of the of the first Jamaican bobsled team (Dudley Stokes) today. I thought ‘Oh my gosh, we’re being compared to you!’ So it’s definitely been very cool.”

Seun added: “It’s so humbling. They set the tone and created a path where 30 years later people still consider them as legends.”

She also insists she has no regrets about her hair-raising choice of career, regardless of what happens in Pyeongchang.

“Everyone thought I was crazy,” she said of her decision to take up the sport.

“They were like ‘wait a minute — bobsled, like the winter sport? You live in Texas where it’s hot, your family and you are from Nigeria. But you’re going to be playing in the snow?’

“We’re just going to give everything we’ve got and wherever the chips fall we’re going to roll with it. We’re doing this for Nigeria, so hell yeah!”

NEWER POSTNigeria Police Recruitment 2018
OLDER POSTMinister: Some Civilian JTF To Be Integrated Into Regular Military in the North-East