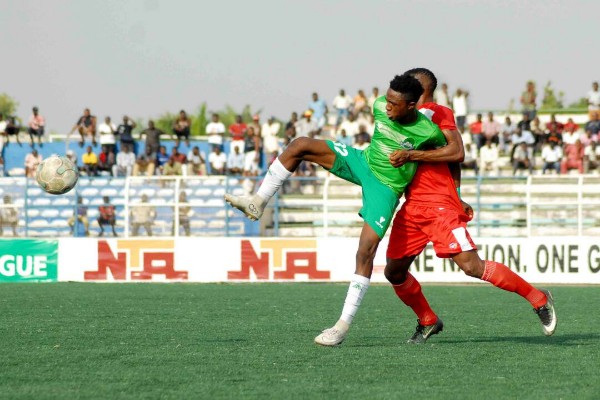 Leaders Lobi Stars extended their unbeaten streak in the Nigeria Professional Football League (NPFL) to five games after they were held to a 1-1 draw by Sunshine Stars on Sunday.

The News Agency of Nigeria (NAN) reports that the match day 19 encounter played in Akure, however,  saw the Makurdi based club side’s lead at the top of the NPFL log reduced from six to four points.

Sunshine Stars missed the chance to score the game’s opening goal when Sikiru Alimi missed from the penalty spot five minutes after the break.

Samad Kadiri, who was with Sunshine Stars last season, shocked the hosts by scoring the opener a minute before regulation time.

However the Owena Waves rallied back and got the leveller two minutes into stoppage time through Jide Fatokun.

The result meant that the league leaders remained at the top with 34 points, while the Akure-based club side slipped to 16th on the NPFL 20-team log.

Niger Tornadoes on 30 points moved into the second position following a 1-0 win against MFM at the Bako Kontagora Stadium, Minna.

Abubakar Nadabo scored the decisive goal from the penalty spot after 13 minutes.

The Minna club are now unbeaten in their last nine league games, while MFM FC dropped to the 11th position.

The star match of the day saw Enyimba International Football Club of Aba and Akwa United battled to a goalless draw at the end of a pulsating encounter at the U.J. Esuene Stadium in Calabar.

Enyimba finished the game with 10 men after their Ghanaian goalkeeper Fatau Dauda was sent off a minute before the break for an off the ball incident with Akwa United’s Ifeanyi Ede.

Both teams had a goal disallowed for handling the ball in the game as the Peoples’ Elephant extended their unbeaten run to six games.

The Aba-based club side climbed to the 8th position, while Akwa United dropped to sixth on the log.

At the Sani Abacha Stadium, Kano Pillars beat Heartland 2-0 with NPFL top scorer Junior Lokosa grabbing both goals for his side.

Lokosa has now scored 16 league goals this season and is now inching closer to breaking the 23-goal mark set by Mfon Udoh in the 2013/2014 season.

Kano Pillars leapfrogged to an impressive third position with 28 points, while the Owerri-based club side still languish at the bottom of the table.

Godwin Aguda, Christian Madu and Kelvin Itoya got the Flying Antelopes’ goals in the game.

Gbenga Ogunbote’s men are now unbeaten in six games against Wikki Tourists as they moved to fifth, while Wikki Tourists slumped into the relegation zone in 17th.

Emmanuel Odafe netted the winning goal in the 56th minute as the Jos-based club side climbed to the fourth spot, while Katsina United dropped to 7th on the log.

El-Kanemi Warriors boosted their survival hopes with a 2-0 win against Nasarawa United with Antonio Desousa and Micheal Ohanu scoring the goals.

The Maiduguri-based club side moved out of the relegation zone to 15th, while Nasarawa United slipped to 14th.

In another match day 19 encounter, Abia Warriors edged out Rivers United 2-1 in Umuahia.

Arinze Nwangwu put the hosts ahead in the 38th minute, while Ndifreke Effiong added the second three minutes after the break, his seventh goal of the campaign.

Malachy Ohawume however scored a consolation goal for Rivers United in the 63rd minute.

Rivers United and Abia Warriors are 9th and 10th respectively on the log.

Go Round FC failed to ease their relegation worries as they were held to a goalless draw by FC IfeanyiUbah at the Krisdera Hotel Stadium, Omoku.

The newly promoted club side still languish in the 18th spot, while the Anambra Warriors are on the 13th position.

Yobe Desert Stars were also held to another goalless draw by Kwara United in Damaturu as the hosts maintained their 12th spot, while Kwara United on 19th are still deeply rooted in the relegation zone.

NAN also reports that a total of 14 goals were scored on match day 19 with six home wins and four draws recorded. (NAN)