Wilfred Ndidi committing his future to Leicester, signs a six-year deal after starring in the win over Wolves

Wilfred Ndidi has committed his future to Leicester by signing a six-year contract, the club have announced. 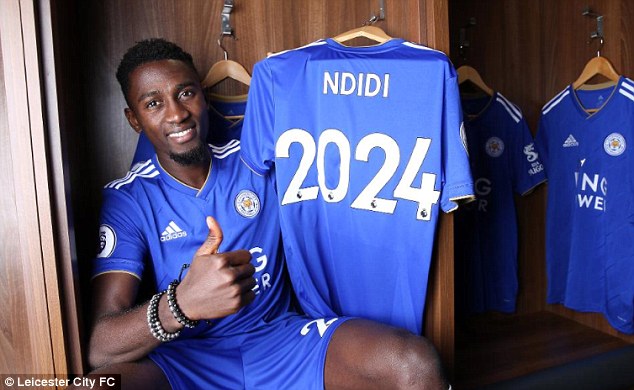 The 21-year-old Nigeria midfielder’s new deal will keep him at the King Power Stadium until the summer of 2024.

A statement on lcfc.com said: ‘In the 18 months since his arrival from Belgian side Genk, the 21-year-old has developed into one of the Premier League’s most exciting talents as well as a key member of Leicester’s first-team squad.’

Speaking after putting pen to paper, Ndidi said: ‘I’m very happy to sign this contract with Leicester. I have enjoyed every moment of my time with the football club, so I’m thrilled to be here for six more years.

‘Together with my team-mates and our wonderful supporters, I hope we can look forward to many more fantastic moments.’

Ndidi has made 63 appearances for the Foxes since his arrival from Genk in a £15million deal in January 2017.