Super Eagles’ Technical Adviser, Gernot Rohr, on Wednesday inspected the Ahmadu Bello Stadium in Kaduna as part of preparations for the team’s qualifiers for the 2019 AFCON, an official has said. 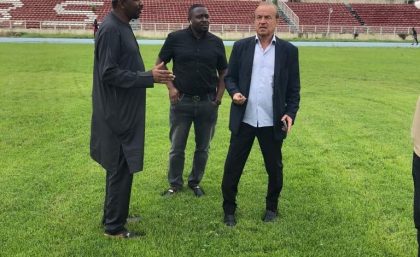 Ademola Olajire, the Director of Communications at the Nigeria Football Federation (NFF), said in a statement on Wednesday the inspection was an indication preparations have begun in earnest.

“The Technical Adviser checked out the facilities at the Ahmadu Bello Stadium in company of NFF’s Second Vice President Shehu Dikko and Super Eagles’ Team Administrator Dayo Achor,’’ Olajire said in the statement.

He added that the former Germany defender Rohr would on Friday release his list of invited players for the away clash with Seychelles.

NAN reports that, after hosting Libya, the Super Eagles will visit the Knights three days later, before heading to South Africa for the return tie against the Bafana Bafana on Nov. 17.

The last match of the series will see the three-time African champions hosting Seychelles on March 22.

The Eagles had, in their opening game of the qualifying series in June 2017, lost 0-2 to the Bafana Bafana in Uyo.

NAN reports that the finals of the 2019 AFCON, which is the 32nd edition, are scheduled to be staged in Cameroon in June.(NAN)

NEWER POSTWhat stool colour has to do with your health, expert explains
OLDER POSTFRSC attributes 50 % of road crashes to drivers’ poor sight