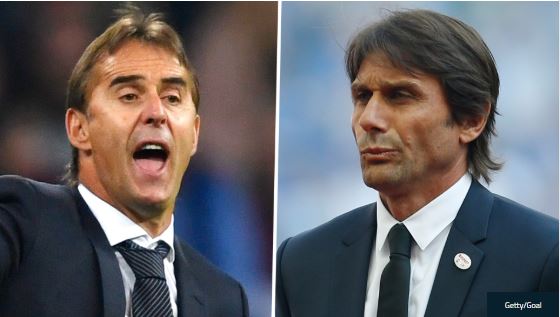 Julen Lopetegui and Antonio Conte
Real Madrid will sack manager Julen Lopetegui on Monday with former Chelsea boss Antonio Conte set to be named as his successor, Goal understands.
Sunday’s dismal Clasico was the final straw for Lopetegui, who watched his side be torn apart in a 5-1 defeat to Barcelona.
The defeat saw Madrid lose three straight Liga matches for the first time since 2009 and left the club in ninth place, seven points behind leaders Barcelona.
Madrid’s executives have scheduled a meeting for Monday, where they will make Lopetegui’s dismissal official. A formal announcement is set to follow.
“We have to take a decision. We can’t continue like this any longer,” a Real Madrid source told Goal.
Speaking after the Clasico, Lopetegui expressed his hope that he would be given the opportunity to guide Madrid out of a sorry slump.
He told reporters after a forgettable display in Catalunya: “I feel sad at the moment, but with full strength to remain in charge of this group.
“This is a tough blow, but I am strong enough to know everything can be turned around. There is a long way to go, and I have a lot of faith in this group of players.”
Sergio Ramos, meanwhile, claimed the Madrid players will have no input in decisions regarding Lopetegui’s future, with results set to determine the fate of the under-fire coach.
Madrid skipper Ramos claims to have no knowledge as to what calls will be made by the club’s board, telling reporters when quizzed on his manager:
“We are with the coach to the death. But results determine a lot whether a coach stays.
“It is not our decision. So we will stay to the side, let the hours pass and whatever happens will happen. It’s not about the players.”
However, Lopetegui’s tenure will end barely four months after it began, with the 52-year-old taking charge in June one day after being fired by Spain on the eve of the World Cup.
The ex-Porto boss oversaw a difficult start to the season for Madrid, who have lost five matches already in 2018-19: four in La Liga and one in the Champions League at CSKA Moscow.
Conte is the man who will be expected to lead a turnaround at the Bernabeu, after the Italian left Chelsea following the 2017-18 season.
Madrid contacted Conte following Sunday’s Clasico defeat, and the 49-year-old is understood to be receptive to the idea of taking over in the Spanish capital.
Conte was also contacted in the summer, but swatted away interest at the time with his contract situation at Chelsea still not sorted.
But it appears that the Italian is ready to commit to Madrid, with Conte expected in the Spanish capital on Monday.